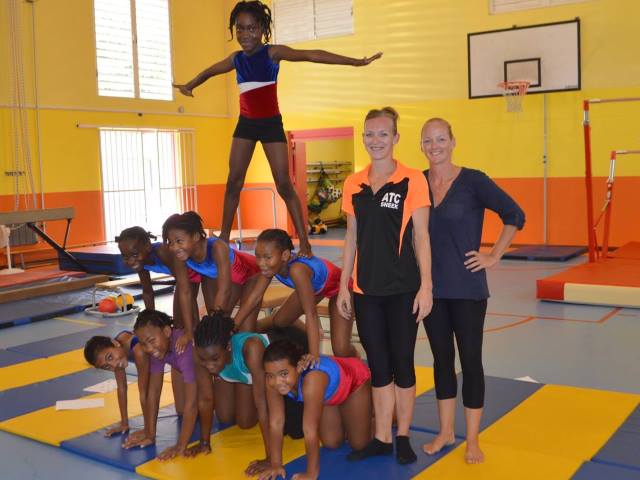 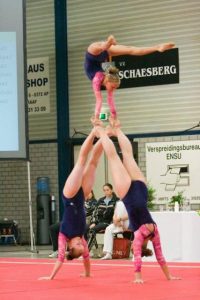 The Steenbeek sisters, who are both gold and silver medal champion gymnasts from the Netherlands, were able to conduct a one-day acrobatic workshop at NIA.

Jiska Steenbeek has been performing in this highly competitive sport for over 18 years, before she retired in 2009, to focus on raising her family. Upon her retirement, Jiska began coaching young girls, and later became a judge in the sport. Jiska, who is currently on vacation in St. Maarten spending time with her family, generously offered some of her vacation time to inspire the young girls at NIA to become professional acrobatic gymnasts.

Her sister Annelies Steenbeek, who recently joined the NIA gymnastic team as coach, has performed for 16 years in the highly competitive sport, which has allowed her to travel around the world and experience different cultures.

Acrobatic gymnastics is a disciplined sport for teams of two, three or four, who perform acrobatic flips, dance and tumbles together while flowing to the rhythmic sounds of music. The team’s performance is based on strength, flexibility, balance and coordination while executing dynamic throws, somersaults, catches and lifts. The performance becomes a breath-taking tempo that speeds up and slows down as the team’s movement gracefully looks like a solo performance.

It was a special treat for NIA students, to have two renowned gold and silver medalist gymnasts performing on the island.

NIA is pleased to have Annelies Steenbeek as part of the NIA gymnastic coaching team, which consists of Peggy Oulerich, Stephanie Haseth, and Ambarl Gounden. The team trains at the Asha Stevens Christian Hillside school gym in Cay Hill, three times a week.