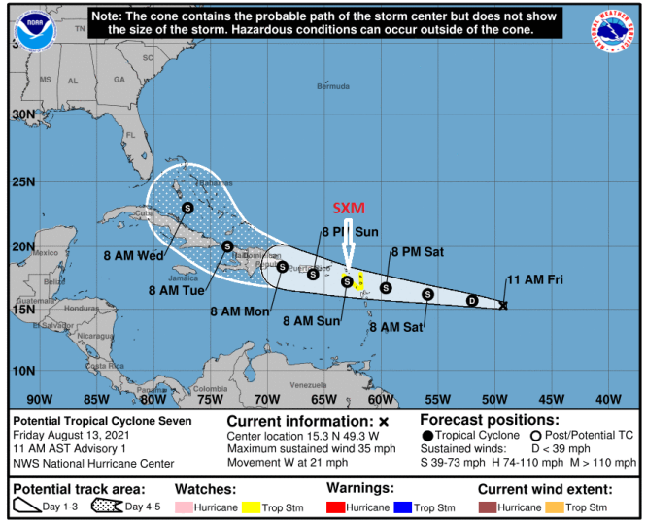 A Special Weather Bulletin is is issued for weather events that are unusual, cause general inconvenience or public concern (requiring the attention and action of emergency authorities) and cannot adequately be described in a regular weather forecast.

A Small Craft Advisory announces that the sea will likely become rough today or is already occurring.
A Flash Flood Advisory announces that heavy rainfall will occur today or is already occurring.
Tropical Storm a cyclone with sustained winds between 34-63 knots (39-73 mph).
A Tropical Storm Warning means that tropical storm conditions are expected somewhere within the warning area within 36 hours.

At 500 PM (2100 UTC), tropical depression 7 formed east of the Lesser Antilles and was
centered near latitude 15.4 North, longitude 51.8 West or about 770 miles southeast of St.
Maarten. The system is moving toward the west near 22 mph (35 km/h).
A motion toward the west or west-northwest with a gradual decrease in forward speed is expected during the next few days. On this forecast track, the system is forecast to pass approximately 50 miles south of St. Maarten on Sunday.

Maximum sustained winds are near 35 mph (55 km/h) with higher gusts. Some strengthening is expected during the next 48 hours and the depression is forecast to
become a tropical storm tonight or Saturday.

HAZARDS AFFECTING LAND:
RAINFALL: This system could produce total rain accumulation of 3 to 6 inches over the
local area. This rainfall may be accompanied by thunderstorms and could produce flash
flooding and rock falls. Flood Advisory/warning will be issued if necessary.
WIND: Windy conditions gusting up to tropical storm force winds are likely to begin on
St. Maarten by late Saturday.

SEAS: Sea conditions will gradually deteriorate over the weekend. Small craft
advisory/warning will be issued subsequently.
 Residents in areas prone to flooding or near the coast should make the necessary preparations to protect life and property.
 The general public should begin all preparations and continue to monitor the updates from the Meteorological Department.

The Meteorological Department of St. Maarten will continue to monitor the progress
of this system and keep the public updated accordingly.