At the recently renovated SHS and Saba’s only primary school, the Minister was received by Principal Diane Wilson and Secretary of the SHS School Board Pamela Meijvogel. Commissioner of Education Bruce Zagers, Island Secretary Tim Muller, Nolly Oleana of the Education, Culture and Science (OCW) unit of the Caribbean Netherlands National Government Service RCN were present during the visit.

The Minister visited grade 6 where he spoke with teacher Marjorie Despo and the pupils. He went from table to table, took a seat among the children and interacted with the 16 children, asking them questions like what they liked about school, what their favorite subjects were and what they wanted to study later on.

Next, the Minister went to the multipurpose room at SHS where part of grade 5 was having computer science from teacher Sundiata Lake. Slob sat for a while with the children at the computers and here too he asked them about school and how they were faring. In the school yard, he spoke with special needs teacher Helen Hassell.

At the Expertise Center Education Care EC2, Slob had a meeting with DEC2 Director Henriëtte van Heijnsbergen and EC2 Board Member Pamela Meijvogel. Van Heijnsbergen and Meijvogel shared their concerns about the financial difficulties of the organization, the challenges of providing care to children with the multiple disabilities and the struggle of securing personnel.

EC2 offers supportive care and activities for children with special needs on Saba, helps to improve this area of expertise within the schools and performs action-oriented diagnostics of special needs children. EC2 has some 50 clients, which is a lot considering that there are about 265 school children on Saba.

At the SCS, the Minister and his delegation were welcomed by Director Anton Hermans who gave a short explanation about Saba’s sole secondary school and the smallest secondary school in the Dutch Kingdom with 113 students. Slob visited several classrooms, including the class of science teacher Briana Murray and Dutch teacher Geertrude Hellema.

The Minister, who is a former teacher, visited three students of the lower and upper sixth grade, the students of the so-called Caribbean Advanced Proficiency Exam (CAPE), a two-year curriculum to prepare them for university. Slob spoke with the students about their school work and ambitions. Teacher, mentor and care coordinator Carol Skinner and physics and economics teacher Peter Johnson. The Minister and his delegation enjoyed a lunch prepared by SCS students.

In the afternoon, Slob visited the recently revamped Queen Wilhelmina Library and the Laura Linzey Day Care Center in The Bottom. At the Day Care, Director Tessa Alexander gave the him a tour and an explanation about the facilities, the renovation that has taken oplace and the investments that are being made as part of the BES(t) 4 Kids program. Later in the afternoon, the Minister climbed Mt. Scenery. Slob leaves on Tuesday morning, January 14 for St. Eustatius.

Presentation CAOP on Employee participation in collaboration with CGOA 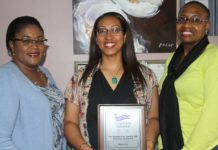