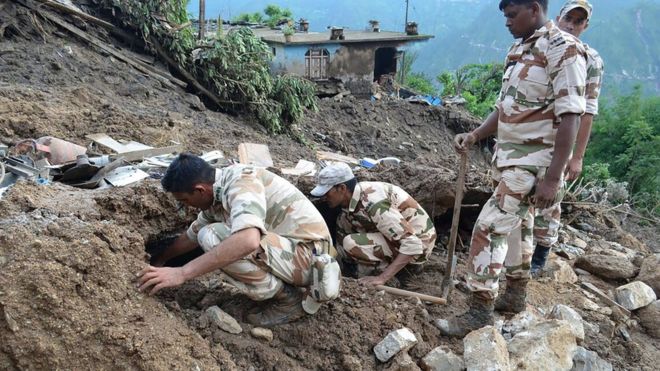 At least 55 people have been killed in northern Pakistan and India in flash floods and landslides triggered by heavy monsoon rains.

Floods in the Chitral district of Pakistan damaged houses and a mosque killing at least 30, officials said.

Another 25 are now known to have died in floods and landslides in India’s Uttarakhand and Arunachal Pradesh states in recent days.

Bad weather has hampered rescue efforts in both countries.

Flash floods hit the village of Arsun, in Chitral, overnight from Saturday to Sunday.

Several people offering special Ramadan evening prayers in the local mosque were killed, local officials said, adding that women and children were among the dead.

A spokesman for the disaster management authority said there was panic in the area as hundreds rushed to flee their homes.

Dozens of houses were also swept away as well as an army post, leaving eight members of the security forces missing.

In northern India, officials said the death toll after Friday’s heavy rains caused flooding and landslides had risen to 15 in Uttarakhand and 10 in Arunachal Pradesh.

Several villages have been buried and a national highway is partially blocked.