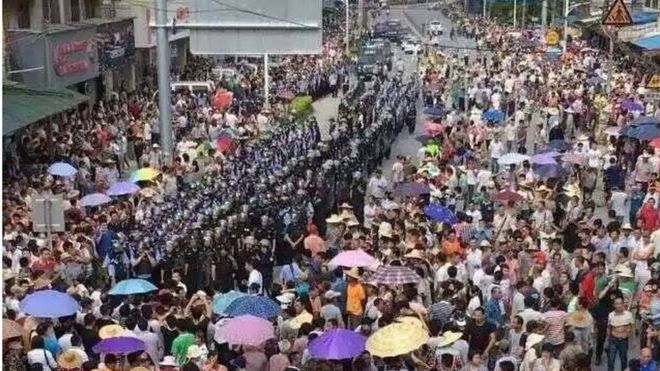 Thousands of people in southern China have turned out in an unusually large protest against plans for a new incinerator.

Witnesses said at least 3,000 officers were in Lubu on Sunday as a protest of 10,000 people turned violent and some demonstrators tried to break in to government offices.

But the authorities said there were just 1,400 protesters at most.

They said 21 people who “led the trouble” were taken away by police.

Authorities also said police were injured but did not say how many, or how seriously.

The incinerator, which would generate power as well as burning waste, is scheduled to be built near the Xi River, the area’s main water source.

One resident who gave only her surname, Lin, told the Associated Press agency: “We worry about air and water pollution.

“The river is a major source of our drinking water.”

Residents said they took to the streets spontaneously after Lubu’s town government announced the project was being halted. No reason was given for the delay, which residents worried would be only temporary.

In a post on social media, the Communist Party propaganda department for the district wrote that “some ordinary people who are unaware of the truth led by some troublemakers attempted to storm the Lubu town government”.

It said that those who had attacked police officers should surrender themselves, while people inside the government offices should leave immediately.

More than 70,000 people live in Lubu, which is in Guangdong province. A resident told the BBC that further protests are planned for Monday, but will not be as well attended because many people work outside the town.