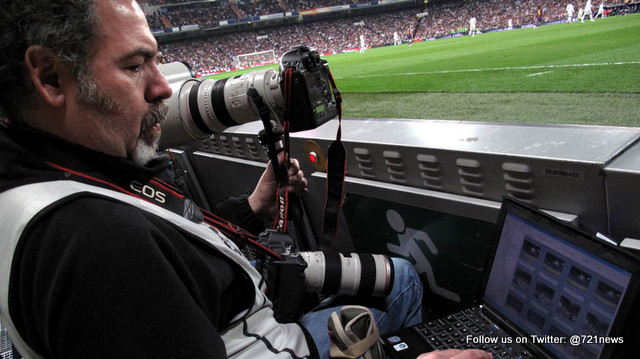 Juan Medina has been following migrants trying to reach Europe for two decades – the Reuters photographer won a World Press award for this image taken in 2004. As the number of deaths at sea rises, he talks about his images.

Warning: Readers may find some of the images disturbing

I started taking photos of migrants because I was living in Fuerteventura in the Canary Islands working as a photographer for the local paper, and they were coming over from all over sub-Saharan Africa.

What happened on that day in 2004 was no different to what had been happening for years, and would keep happening.

The journey across the sea to Europe is taken by a lot of people in search of a better life. At any moment boats can capsize, they can run out of gas, the motor can break down – and they’re vulnerable to the cold weather.

Listen to Juan Medina on Outlook on the BBC World Service on Tuesday 28 April at 11:05 GMT

That day, the migrants were on a small boat, apatera, full of people. They had been on board for many hours.

As they reached the Canary Islands, there was a Civil Guard patrol waiting to detain them. The migrants started to board the larger vessel but when they all moved to one side, their boat capsized.

Twenty-nine of them were rescued. Nine died. The people on board were all men. Many came from Mali, some from Ivory Coast and some from Ghana.

The survivors went through the usual process on their arrival – migrants are held in a detention centre for foreigners for 40 days, then they are either put on a flight to their countries of origin, or they are flown to mainland Spain.

I know what happened to two of the men on that boat – Isa and Ibrahim. I met them the day they were rescued. They are the men I photographed being pulled out of the sea.

They were sent to Spain – Isa was taken to Valencia and Ibrahim to Murcia.

They made it very clear what was going on back home in Mali. They come from large families. In Isa’s case for example, they depend on crops and the harvest year by year. Work is scarce. They didn’t have any opportunities. They were really living in a situation of extreme need.

Despite the risks they decided to make the journey. For them it was the only way out. They thought it would be worth it to try to help their families. Perhaps they didn’t know exactly what was going to happen to them minute by minute, but they knew it was dangerous.

I went to their homes in Mali to meet their families and was greeted with open arms, with a lot of love – in the exact opposite way to how the Spanish greet migrants here. Their families told me their story so that I could understand why their sons were willing to risk their lives.

The main thing that struck me is the terrible living conditions they left behind. They risked dying at sea but they faced even greater pressures trying to survive at home. They did it because they had no other way out. It’s not because they were adventure seekers.

Some people who survive the journey join our society, in as much as our society allows them to – often in an unstable precarious way, without papers, without rights.

As journalists we have the opportunity to see what’s happening first hand, but we should all be involved in this situation, because this is happening on our own doorstep.

In reality they are our neighbours, they could be living on the floor above you, selling you your food, or go to school with your children. If people feel they are not directly affected by this situation, they are turning a blind eye.

I think my photos are documents. These are things that are happening day after day.

Throughout history it’s thanks to photographs or articles that we know what has happened – so we know that at the end of the 20th Century and the turn of the 21st Century people travelled to the gates of Europe in much the same way slaves did in the 17th Century.

Many of them would have drowned at sea too, squashed into makeshift boats that would sink.

And people keep dying today. It’s unusual for a month to pass without a tragedy. Even after 20 years following this story, people are still drowning every week and I don’t see anything changing. If there is any change at all, it’s got worse. Each tragedy or shipwreck gets bigger and more painful because more people lose their lives. There is more police pressure on Europe’s borders than ever before – but people are still dying.

Isa and Ibrahim are now living legally in Spain.

Juan Medina will be on Outlook on the BBC World Service on Tuesday 28 April at 11:05 GMT. Listen via iPlayer or get the Outlook podcast.