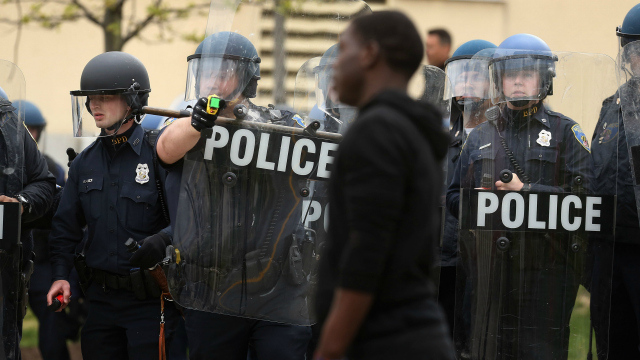 • There were nearly 200 arrests, 144 vehicle fires and 15 structure fires in Baltimore during the unrest that began Monday, said Howard Libit, the city’s director of strategic planning and policy.

• Maryland Gov. Larry Hogan met Tuesday morning with police and visited a subway station that closed amid the recent violence, according to his official schedule. He is set to meet later with faith and community leaders before talking to the media around noon.

Charred cars and buildings. Hospitalized police officers. Looted and damaged businesses. No school, because it might not be safe for children to go outside.

That was the stark reality Tuesday after a night of riots, fires and heartbreak in Baltimore, parts of which looked more like a war zone than a place where people live, work and play.

“Too many people have spent generations building up this city for it to be destroyed by thugs who — in a very senseless way — are trying to tear down what so many have fought for,” Mayor Stephanie Rawlings-Blake said.

At least 15 officers were wounded in the unrest, six of them seriously, the city’s police commissioner said. Getting them healthier is the first goal. Another is making sure that they’re not joined in local hospitals by others — be they more law enforcement officers or civilians — in further unrest.

The tumult follows a spate of protests across the country over the deaths of black men following encounters with police: Michael Brown in Ferguson, Missouri; Eric Garner in New York; andWalter Scott in North Charleston, South Carolina. Underlying all this unrest is what Baltimore City Council Member Brandon Scott called “a long, long, longstanding issue with young African-Americans” in cities around the country.

“We’re talking about years and decades of mistrust, of misfortune, of despair that it’s just coming out in anger,” Scott told CNN. “No, it is not right for them to burn down their own city. But that is what’s coming out of these young people.”

In Baltimore, it’s supposed to be about Freddie Gray. He died on April 19, one week after being led into a Baltimore police vehicle.

His family wants justice, hoping that multiple investigations shed light on why and how he died. They want police to be transparent and be held accountable.

What they don’t want, though, is violence — certainly nothing along the lines of what happened Monday. Gray’s mother, Gloria Darden, had pleaded, “I want y’all to get justice for my son, but don’t do it like this here.”

A lawyer for Gray’s family, Mary Koch, called what Baltimore woke up to Tuesday a distraction from the family’s goals of getting justice for Gray and preventing more people — including other African-Americans — from experiencing their grief.

“The one thing they wanted was some peace and some calm on the day that he was actually buried, and (they) asked the community to do that,” Koch told CNN. “And the community didn’t honor their wishes. And, in that way, they dishonored Freddie’s legacy.”

In some ways, Baltimore has been simmering since Gray died from a spinal cord injury that he suffered while in police custody. Protesters hit the streets for days, asking questions like how did Gray suffer his fatal injuries, why did it take authorities so long to get him medical help and why was he arrested in the first place.

Firm answers are still slow to come on all those fronts, though some may emerge with the anticipated Friday release of a police investigation.

Still, while there were demonstrations and arrests, what unfolded Monday was very different.

It started with rumors of a “purge” after school Monday starting in Baltimore’s Mondawmin Mall. The rumors echoed a film about a dystopian society in which, for one day each year, all laws are suspended for one 24-hour period.

Police Commissioner Anthony Batts said authorities knew about a “large ‘purge’ of high school students from across the city,” staging 250 to 300 police officers at the mall as a precaution.

But it wasn’t enough, according to Neill Franklin, a former Maryland state police officer who has worked with Baltimore police. Franklin told CNN that law enforcement officers “were prepared physically, (but) they were overwhelmed by the number of students.”

Police in riot gear took cover behind an armored vehicle as assailants — the instigators appearing to be high school students, according to Batts — hurled various heavy object at them.

“I think they thought it was cute to throw cinder blocks at police,” the police commissioner said.

On top of that, Baltimore police warned of a “credible threat” that gangs including the Black Guerilla Family, Bloods, and Crips had agreed to team up to “‘take out’ law enforcement officers.”

It’s not known how many, if any, of the police officer’s injuries could be traced to gangs.

Nor was it clear how many, if any, rioters, peaceful protesters or innocent civilians got hurt in the mayhem.

At least two dozen people, though, were arrested.

None of this is what Gray’s family wanted. They called for Monday to be a day of reflection, when they could finally bury Freddie Gray in peace. 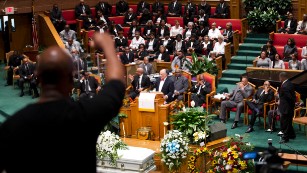 Yet they couldn’t stop the Mondawmin Mall showdown or the melee that quickly spread to other parts of the city.

Amid the clashes came flames. Some obviously targeted law enforcement. For others, the intent was less clear — though it certainly didn’t help to have fires break out when the city’s first responders had to deal with so much.

This includes an enormous fire that broke out at an affordable housing center for seniors. It was just months away from opening.

Pastor Donte Hickman of the Southern Baptist Church, which owns the facility, said 60 units of senior housing were lost.

The mayor said it’s not clear whether the fire was related to the rioting, and its cause is under investigation.

Regardless, the loss has been devastating.

“My eyes have been filled with tears,” Hickman said. “Someone didn’t understand that we exist in the community to help revitalize it.”

To this end, Rawlings-Blake, Baltimore’s mayor, took steps as well by imposing a mandatory daily curfew from 10 p.m. to 5 a.m. This is for everyone and in addition to a 9 p.m. for children under 14, while youths ages 14 to 16 have to be inside by 10 p.m. on school nights.

And Maryland Gov. Larry Hogan declared a state of emergency and activated the National Guard, with 500 members on the ground Tuesday morning, hundreds more on their way and up to 5,000 ready to answer the call.

They’ll join Baltimore police and up to 5,000 law enforcement officials that will be requested from around the mid-Atlantic region to help prevent more violence, said Col. William Pallozzi of the Maryland State Police.

“Today’s looting and acts of violence in Baltimore will not be tolerated,” Hogan said. “There is a significant difference between protesting and violence, and those committing these acts will be prosecuted under the fullest extent of the law.”