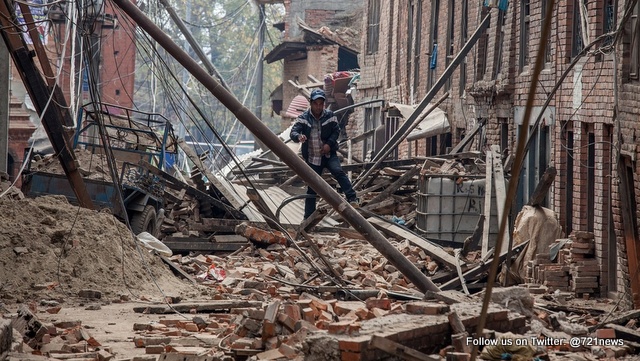 Nepal is “on a war footing” as it tries to help survivors following Saturday’s earthquake, its prime minister says.

Sushil Koirala said the government was doing all it could but was overwhelmed.

The UN has estimated that eight million people have been affected – more than a quarter of the population. Foreign aid is arriving but being hampered by congestion at Kathmandu’s sole airport.

“The government is doing all it can for rescue and relief on a war footing” in a “difficult hour” for Nepal, Mr Koirala told Reuters news agency.

He has also admitted that lack of equipment and expert personnel meant the “appeals for rescues coming in from everywhere” in many cases could not be met.

More than 8,000 people are known to have been injured when the quake hit and in numerous powerful aftershocks which have sent people fleeing from their homes to camp on open ground.

Water, food and electricity are in short supply and there are fears of outbreaks of disease.

“Eight million people in 39 districts have been affected, of which over two million people live in the 11 severely affected districts,” said the most recent report from the UN Office of the Resident Co-ordinator in Nepal.

Landslips and periodic bad weather in the remote mountainous region around the epicentre are adding to the challenge for rescue and relief teams.

Rebecca McAteer, a US doctor who was one of the first to arrive in the district of Gorkha close to the epicentre, told Associated Press that 90% of houses there were “just flattened”.

She said most residents were older men and women and children, as the younger men had left to find work elsewhere.

Many have also lost livestock and have little food.

But helicopters are now air-dropping tents, dry food and medicine – though they are yet to reach many isolated communities.

Where helicopters manage to land, they are mobbed by hungry and fearful villagers pleading to be airlifted out.

“The ground keeps shaking, even this morning it did,” Sita Gurung told AFP news agency in the village of Lapu.

“Every time it feels like we will be swallowed, that we will die now. I want to get out of here!” she added, saying the villagers had “nothing left”.

This camp had been set up on a playground and even now there are quite a few children playing. But it no longer resembles a safe place. There’s rubbish everywhere, paper plates, wrappers and plastic glasses are strewn all over.

“It’s getting quite bad,” says one man who is here with his wife and four daughters. “We’ve been here for three days and we’ve been living on instant noodles. There’s nothing else to eat.”

His house is not badly damaged, but he is adamant that he will not go home despite the challenging conditions in the camp.

“We’ve heard all these rumours about more earthquakes and aftershocks. We will not leave this place, not for a while.”

The day the quake hit my home

How long can survivors last under rubble?

The Nepali government has pleaded for overseas aid – everything from blankets and helicopters to doctors and drivers.

Many countries have sent aid including India, China, the UK and US.

But there is a logjam at Kathmandu airport, with individuals trying to fly out of the country while flights of aid and rescue teams wait to land.

On Monday, four Indian air force planes had to return to Delhi international airport after encountering “congestion” at Kathmandu, tweeted a spokesman for India’s defence ministry.

Nepal earthquake: Before and after

In pictures: Devastation after the quake

Almost the entire Nepali army and police have joined the search and rescue operations, officials say.

People are still being pulled from the rubble more than 50 hours after the tragedy.

Hospitals are unable to cope with the huge numbers of people in need of medical attention and some Nepalis have complained of aid being slow to reach them.

“Nobody has taken care of us,” said Namrata Adsikron, sheltering in a tent in Kathmandu.

“We have to stay like this outside… The question now is what do we do and where to go?”

The country’s most deadly earthquake in 81 years triggered avalanches that have killed 18 people on Mount Everest – the worst disaster in history on the world’s highest peak.

All those injured on the mountain have now been evacuated, along with the dead.

Expedition leader Chris Harling described the quake on the north side of Everest, telling the BBC the camp “started to vibrate underneath us which increased in intensity up to the point where the ground was literally shaking backwards and forwards like a giant jelly.

“It was absolutely incredible.”