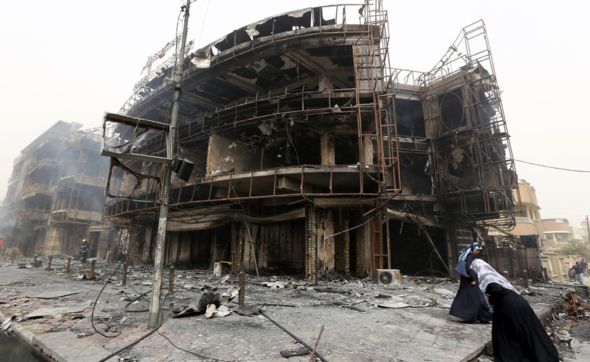 At least 125 people have been killed and about 150 injured in an explosion claimed by the so-called Islamic State group in Baghdad, Iraqi police say.

A car bomb exploded on a busy street in the Karrada district late on Saturday.

The mainly Shia area was busy with shoppers late at night because it is the holy month of Ramadan.

Iraqi PM Haider al-Abadi was met by angry crowds while visiting the scene on Sunday. He later declared three days of national mourning.

A second bomb also exploded at about midnight in a predominantly Shia area north of the capital, killing another five people.

The bombing in Karrada is the deadliest in Iraq this year and comes a week after Iraqi security forces recaptured the city of Falluja from Islamic State (IS) militants.

Police said the dead included at least 15 children and six policemen. At least 12 other people were missing, feared dead.

One senior Iraqi official warned that the death toll could rise still further.

The US said on Sunday that the latest attack strengthened its resolve to support Iraqi forces in their fight against IS.

“We remain united with the Iraqi people and government in our combined efforts to destroy Isil,” the White House statement said, using another term for the group.

The destruction and death adds up to a clear message from the jihadists of so-called Islamic State. They are saying that even if they are defeated on the battlefield, they can still hit back where it really hurts – killing civilians in the centre of the Iraqi capital, and other capital cities, too.

IS have just suffered a serious defeat at the hands of Iraqi forces in Falluja. The town, less than an hour’s drive from Baghdad, has been in their hands since early 2014. IS are showing their supporters, and their enemies, that they are not beaten.

So many were killed and wounded because the streets are crowded at night at the end of a day’s fasting during Ramadan, with thousands in a mood to celebrate.

It is only realistic to fear that there will be more attacks like this, as IS comes under more military pressure.