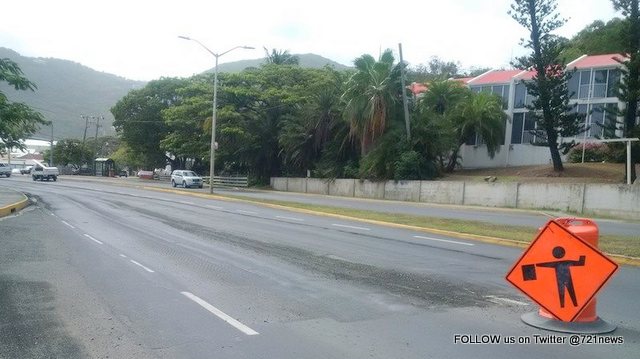 ROAD TOWN Tortola, VI – At a time when the Government of the Virgin Islands is said to be experiencing severe financial constraints, thousands of dollars continue to go wasted. This is evident when traversing the Sir Francis Drake Highway in Road Town.

Currently a stretch of road along the highway from the area of Treasure Isle all the way down to the Road Town Festival Grounds is being reconstructed. This is after the same stretch of road was resurfaced prior to the June 8, 2015 general elections.

Work, however, has been moving at snail’s pace since it started over a week ago.

“When and how that happens I can’t give you a good answer right now but I know we are trying to move as quickly as possible,” Hon Vanterpool added as he offered an apology to the driving public for the inconvenience.

“This morning (Thursday) I drove on it and it wasn’t a pleasant thing to do so we are hoping that we can alleviate that problem very quickly, but we are working very hard towards that.”

He said work is being done on a very small part of the road that was done earlier this year, from the street lights at Pasea to Treasure Isle. “We weren’t happy with the quality with what was done and that’s the small stretch in terms of the bumps that you might have experienced.”

Asked how much is it costing Government to redo what was done before, Hon Vanterpool responded, “I have no clue, not a major portion, but it would have some costs as a result of that error.”