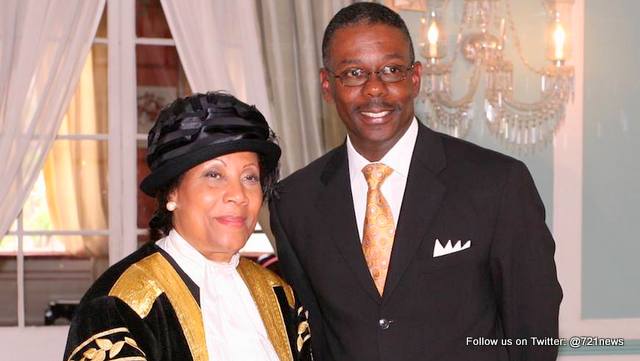 Antigua — In his first public act since gaining the leadership of the Opposition United Progressive Party, Mr. Harold Lovell representing Dame Louise Lake-Tack in Her Excellency’s inflated claim for gratuity, was dealt a severe defeat in the High Court of Justice on Thursday afternoon, May 21, 2015.

High Court Judge Brian Cottle ruled that the quantum of the money owed to the former Governor General for gratuity was EC$375,000 (three hundred and seventy-five thousand dollars). Mr. Lovell, a former Finance Minister and the lawyers representing the former Governor General made the highly inflated claim for payment of $1,639,641.46 (one million six hundred and thirty-nine thousand six hundred and forty-one dollars and forty-six cents) in gratuity, owed to Dame Louise Lake-Tack.

The skillful representation of the Government’s team on the morning of Thursday, May 21, 2015, led to a saving of more than $1,250,000 for the taxpayers of Antigua and Barbuda. Prime Minister Gaston Browne congratulated the Attorney General and the attorneys for representing the people well, and for securing so large a saving for the people.

Since the Government of Antigua and Barbuda had already made a down-payment on the gratuity of $100,000 (one hundred thousand dollars), it was agreed that only $275,000 (two hundred and seventy-five thousand dollars) need to be paid to the Governor General for gratuity.

Mr. Lovell and the two lawyers on his legal team also argued to include the Finance Minister as a defendant, in the failed lawsuit. The High Court Judge ruled that the Crown Proceedings Act, nearly 60 years old, commands that only the Attorney General can be sued in a matter such as this The Honourable Gaston Browne, the Court ruled, ought not to have been named as a defendant. The Court ordered the plaintiff to strike out Prime Minister Browne—the Finance Minister—as a defendant.

The Prime Minister, acting in his capacity as the Minister of Finance, this afternoon issued an order compelling payment of the gratuity in full, before May 31, 2015, now that the issue is determined.

The claim for holiday pay, also highly inflated by the former Governor General’s lawyers, will be argued in a few short weeks before the High Court. The Attorney General has indicated that the $237,105.00 (two hundred and thirty-seven thousand, one hundred and five dollars) claimed by the Plaintiff is also inflated. This issue will also be pursued by Mr. Harold Lovell and his team, the Attorneys for the former Governor General, but the Government’s team is certain that it will prevail.

“It seems to me that the Judge tried to persuade the plaintiff’s lawyers to negotiate the issues out of the public view,” Attorney General Steadroy Benjamin reported. “However, the combative team wanted a public airing, to their chagrin,” the Attorney General concluded. The new leader of the United Progressive Party, Mr. Harold Lovell, evidently wished to embarrass the Government; he failed, one commentator concluded.