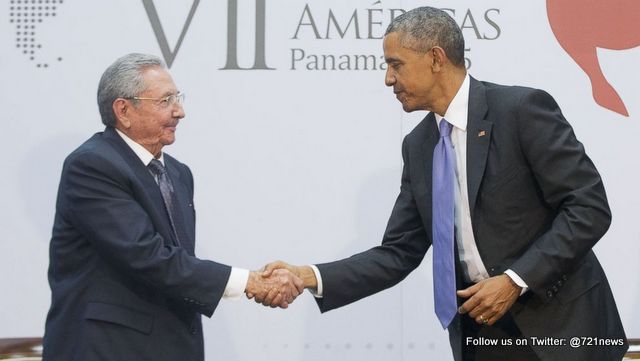 British Broadcasting Corporation – US President Barack Obama and Cuban President Raul Castro have met on the fringes of the Summit of the Americas, the first formal talks between the two countries’ leaders in half a century.

Earlier, Mr Obama described the historic thaw in US-Cuba relations as a “turning point”. This is their first full meeting since the thaw began in December.

Mr Castro has called for the lifting of the US economic blockade on Cuba, in place since 1959.

President Obama said that it was time to “try something new” and that it was important for the US to engage more directly with the Cuban government and the Cuban people.

He added that over time it would be possible to “turn the page” on old divisions but he acknowledged that there were still significant differences.

“We have both concluded that we can disagree with a spirit of respect and civility.”

Mr Obama said that immediate tasks include normalising diplomatic relationships between the two countries and opening a US embassy in Havana and a Cuban embassy in Washington DC.

Mr Castro said that he was ready to talk about sensitive issues but that patience would be needed.

“We are willing to make progress in the way the president has described,” he said.

Latin American and Caribbean leaders at the summit in Panama welcomed the reconciliation.

Brazilian President Dilma Rousseff hailed it as a courageous effort to end the last vestiges of the Cold War, which she said had caused great damage in the hemisphere.

President Cristina Fernandez de Kirchner of Argentina gave the main credit to Cuba, saying it had fought with unprecedented dignity against the US blockade.

Earlier, the Cuban leader referred to Mr Obama as an “honest man” after a lengthy speech largely taken up with the history of US-Cuba relations.

“When I talk about the revolution, the passion oozes out of me,” the Cuban leader said. “I have to ask President Obama for forgiveness. He is not responsible for the things which happened before his time.”

Speaking to fellow leaders, Mr Obama said: “This shift in US policy represents a turning point for our entire region.”

The US broke off diplomatic relations with Cuba in 1959 after Fidel Castro and his brother Raul led a revolution toppling US-backed President Fulgencio Batista. The Castros established a revolutionary socialist state with close ties to the Soviet Union.

The Summit of the Americas brings together the leaders of North, Central and South America. This, the seventh, is the first which Cuba is attending.

Attempts to improve relations between the US and Cuba began in December when Mr Obama declared Washington’s approach “outdated”.

Political reform and human rights in Cuba are matters of particular concern to Washington.

Along with an end to the embargo, Havana wants removal from Washington’s list of state sponsors of terrorism, something Mr Obama has already signalled he is prepared to do.

Cuba’s presence on the list has been one of the main hurdles on the way to closer ties between the two countries as it hampers Cuba’s ability to conduct financial transactions.

As US ties with Cuba improve, those between Venezuela and Washington remain fractious.

The US imposed sanctions last month on a group of Venezuelan officials it accuses of human rights abuses. Mr Obama also issued an executive order declaring Venezuela a threat to US national security.

Venezuelan President Nicolas Maduro, speaking at the summit, described the order as “disproportionate” but said he was ready to talk with the US president to “resolve differences”.

The summit also highlighted stark differences between President Rafael Correa of Ecuador and the US.

Mr Correa said the US had failed to live up to its ideals: “Let’s talk about human rights. In Ecuador we don’t have torture, the death penalty or extrajudicial renditions.”

In response, Mr Obama said he always “enjoyed the history lessons” he received at such summits, but was the first to acknowledge US faults.