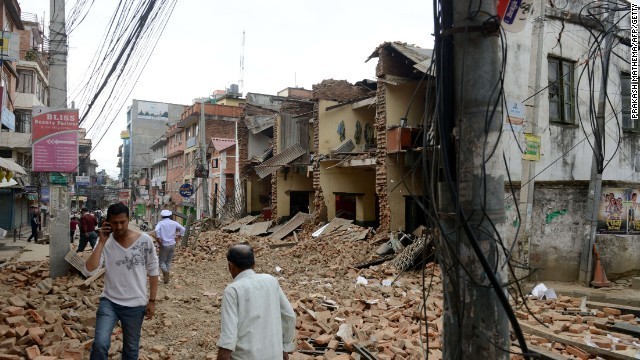 Historic buildings in Kathmandu lay in rubble on the ground. The injured were being treated outside hospitals in chaotic scenes. Residents, terrorized by a seemingly endless series of aftershocks, huddled outdoors.

The death toll was reported by Lakshmi Prasad Dhakal, a spokesman for Nepal’s Ministry of Home Affairs. But given that the rescue effort is still in its early stages and that people in outlying areas may well have been affected, as well, it seems probable that the number will rise.

And Kathmandu, which sits in a valley surrounded by the Himalayas, has a population of 1 million people.

Some people who experienced the quake spoke by telephone with CNN, describing scenes of chaos, fear and suffering.

CNN’s Manesh Shrestha said he saw five bodies at a hospital to which he walked to seek treatment for his own injuries. People with severe injuries were lying outside, with doctors administering CPR to at least one person, Shrestha said. 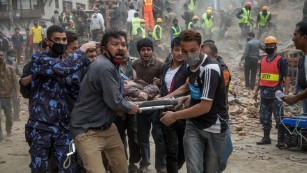 “It’s quite chaotic,” he said by phone. “People are wailing, crying.”

Shrestha, who needed stitches, was turned away because other people were in more dire need of care. He said he saw people with broken bones and severe head injuries.

“Everest base camp huge earthquake then huge avalanche from pumori,” Twitter user Alex Gavan said. “Running for life from my tent. Unhurt. Many many people up the mountain.”

The quake, which struck at 11:41 local time (05:51 GMT). occurred at a depth of 9.3 miles, which is considered shallow and more damaging than a quake centered deeper under the earth’s crust. It was reported by people in the area as having lasted a very long time. On person said he felt as if he were on a ship in rough seas.

The U.S. Geological Survey had at first rated the temblor at 7.5 magnitude but later upgraded the strength. It reported aftershocks of 6.6 and 5.1 magnitude, among many others others.

In all, the USGS said, at least 15 aftershocks of magnitude 4.5 or greater had been felt in Nepal so far.

One witness told CNN by phone that people were gathered outdoors in fear. Another said via Facebook that power was out and people were listening for news on their car radios.

“We are scared and waiting for the tremors to end,” Shiwani Neupane said on Facebook chat from Kathmandu. “We are all sitting outside because there is more news of another quake.

“There is no power and families are listening to the FM radio inside their cars,” Neupane said. “News of multiple building collapses. I’ve seen many cracked walls and roads and buildings. The Dharara was packed with people a while ago. There are police everywhere trying to move rubble to make space on the roads for ambulances. Everyone is very scared.”

The force of the quake was said by people who contacted the USGS to be from “severe” to “violent,” nearly the highest rating on the intensity scale. Tremors were felt as far as New Delhi, more than 200 miles away in neighboring India. An official said they were felt there at magnitude 5.0. 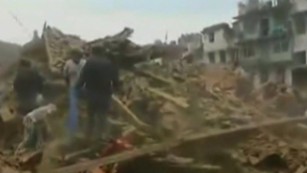 The shaking was rated as “strong” to “severe” on the USGS ShakeMap. CNN sister network CNN-IBN reported that roads in the area were out.

Kanak Masni, a journalist in Kathmandu, told CNN by phone that a historic building in Kathmandu called the Dharahara — also known as the Bhimsen Tower — had tumbled down. The building, built in 1832, was nearly 63 meters (207 feet) tall and provided visitors with a panoramic view of of the Kathmandu valley.

Masni told CNN by telephone that this appeared to be “the most massive earthquake to hit central Nepal since 1934.” In that quake, which was 8.0 magnitude and centered near Mount Everest, more than 10,000 people were reported killed. 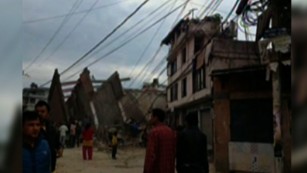 IBN reporter K. Dhiksit looked out his window in Kathmandu and saw the collapsed walls of many buildings. As he watched, an aftershock rattled the street. He heard “big booming sounds,” he said, and saw people fleeing into the streets.

Photos of caved-in and toppled buildings appeared on social media.

India’s Prime Minister Narendra Modi said in a tweet, “We are in the process of finding more information and are working to reach out to those affected, both at home & in Nepal.”