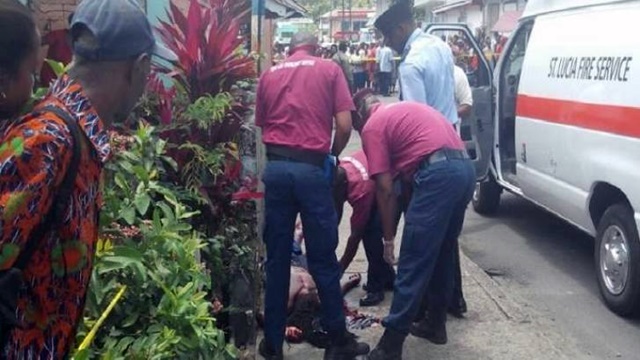 Cheryl Clarke, widow of community elder Asher ‘BJ’ Emmanuel who was gunned down in Castries on Tuesday, April 7, said her husband was innocent and advised his killers to turn themselves in.

Emmanuel, 48, originally from Bexon, Castries died on the spot after he was shot on Chaussee Road, near the Leslie Land intersection, at about 11:20 a.m.

Police said a post mortem conducted on Wednesday, April 8 revealed that Emmanuel died ”as a result of hemorrhagic shock secondary to gunshot wound to the head”.

Emmanuel was a former coordinator of the Wilton’s Yard After-School Programme and known as a champion of the peace in the Wilton Yard’s (Graveyard) community.

In an interview with HTS, Clarke, who was looking forward to celebrate her first wedding anniversary with Emmanuel in two weeks, said her belief in God is helping her to cope with the tragedy.

“I can’t find words to say, the Almighty give me strength and I try to live with it,” said Clarke, whose brother, Arthur ‘Afoo’ Clarke was gunned down in Chase Gardens on January 27, 2011.

Clarke, who lives in Wilton’s Yard, recounted her last communication with her husband.

She leaves all revenge up to God.

“I am sorry to say to St. Lucians and whoever expecting the worst: the Almighty is not asleep. I strongly believe in Him. I think I had more than one death to realise that. With the Almighty, everything, everything will be answered. He is the only one who has the answers. As far as violence is concerned, on my side, like I will say again, the Almighty will do that.”

Clarke also had a message for the killers.

“Too bad, I am going to say to the young ones who did that. I am so sorry that you let your life go astray when it could have been saved. I hope you can find it… in your heart to see that you did something wrong to someone who did nothing to you all, that you all can only find it to give up yourselves and face the dance that your lies started.”

Emmanuel is the third homicide victim of 2015 and the second individual to be gunned down in the Chaussee area in three days.

The first homicide of 2015 occurred on Saturday, April 4, at about 11: 20 p.m., when a homeless man, 49-year-old Anthony “Tony” Harris, died on the spot after being shot in a reported crossfire off the Chaussee Road, near Wilton’s Yard (Graveyard). A teenager, Brent Frederick, sustained gunshot wounds in the mouth, in the same incident.

Police officials believe all the shootings are gang-related.

The three homicides came not long after a shooting incident in Wilton’s Yard – on Wednesday, March 25 – that left two men injured.

Ernie Pierre, 33, of Wilton’s Yard, Castries and Richard Mathew, 42, of Morne Du Don, Castries were hospitalised after being attacked by gunmen.

Police said the men were having a drink at a bar in Wilton’s Yard when three masked men fired shots at them at about 10:10 p.m.