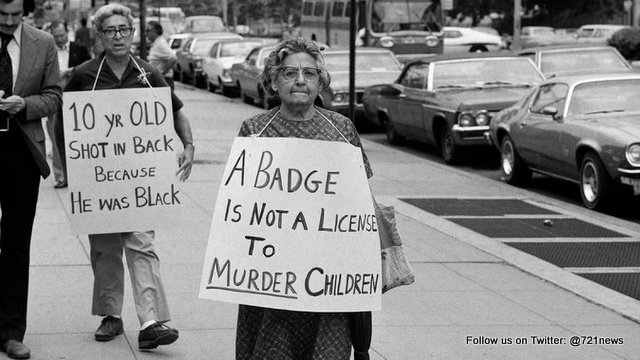 It was 1973, long before anyone could  imagine hashtag declarations of solidarity and protest, the kind of message to the world that today might read, #IamCliffordGloverInTheFourthGrade.

No one could pull out a phone to make a video of Clifford Glover, a 10-year-old running from a plainclothes police officer with a gun who had just jumped out of a white Buick Skylark in Jamaica, Queens, on a spring morning in 1973.

“I am sure a camera would have helped, but the ballistics were clear,” Albert Gaudelli, a former Queens prosecutor, said this week. “The bullet entered his lower back and came out at the top of his chest. He was shot T-square in the back, with his body leaning forward. He was running away.”

That bullet killed Clifford Glover. Its trajectory — through a family, a neighborhood, a generation — can be traced to this day, in injuries that never healed, in a story with no final word. When a black man named Walter Scott was shot by a white police officer in North Charleston, S.C., on April 4, a cellphone video made by a passer-by showed that Mr. Scott was also running away when he was killed and that he was not, as the officer claimed, carrying a police Taser.

“With all this killing and stuff,” said Pauline Armstead, a sister of the dead boy, “they need to go back to Cliffie Glover.”

Clifford, a black boy, had been shot by Officer Thomas Shea, a white man, who said he had tried to question him and his stepfather because they fit the descriptions of cab robbers. They ran. The officer said he fired when Clifford, in flight, pointed a gun at him, which the mortally injured boy had then managed to toss or hand to his stepfather.

In the hours and days that followed the shooting, armies of investigators scoured the streets and sewers, pored over court records and arrived, without warrants, to search the homes of Clifford’s family and relatives.

“Guys were trying to help Shea, and coming up with all kinds of stuff,” said Mr. Gaudelli, who was the chief homicide prosecutor in Queens at the time. “Someone showed up with a starter’s pistol, but as soon as you pressed them on it, they folded. There was no gun.”

People in Jamaica rose in protest; the streets were blocked with heavy construction equipment owned by a black contractor. Mr. Shea became the first police officer in nearly 50 years to be charged with committing murder while on duty.

“Shea says that the kid turned and appeared to have a gun,” Mr. Gaudelli said. “That’s what got him indicted: The ballistics made Shea a liar.”

But not, apparently, a murderer, at least in the eyes of the jury of 11 white men and one black woman who found him not guilty. Afterward, many of the jurors joined Mr. Shea and his lawyers at a Queens Boulevard restaurant to celebrate. They told reporters it was possible Mr. Shea had been telling the truth about seeing a gun.

Later, Mr. Shea would be fired despite a rally by police officers and the pleas of his lawyer, Jacob Evseroff, who said his client was needed on the force “to protect us from the animals who roam the streets of New York.”

The Long Island baseball team had come to Queens as part of “an interracial, inter-neighborhood thing,” Mr. Adams said. “It was their first visit.” The Jamaica team tried to stop the assault but could not. “That was all the outrage,” he said, adding that “because of what happened, a lot of our guys quit the team, never played baseball again.”

For his generation of black boys and girls, Mr. Adams said, the verdict “brought a lot of despair.”

Because Mr. Shea had spoken freely with his superiors, the largest police union began a campaign urging its members not to talk after a shooting until a union lawyer had arrived.

For Clifford’s family, his death changed everything.

“They wrote that we were poor,” Darlene Armstead, a younger sister, said this week. As she and three other siblings, Kenneth, Pauline and Patricia Armstead, described the household this week, the family may not have had much money, but before Clifford’s killing, it was sound.

Darlene’s father, Add Armstead, who was Clifford’s stepfather, went to work every morning at a junkyard.

The family had dinner each night at the same time, around one table, Ms. Armstead said, then watched cowboy shows on television. On summer weekends, neighborhood children feasted in the backyard on watermelon laid out on a door, covered by a sheet, that rested on two clean garbage cans. Add Armstead and his brothers enjoyed cigars and burgers.

She had to make beds. One brother had to clean the yard and bring out the garbage. Clifford, a fourth grader at Public School 40, went with his stepfather on weekends to the junkyard, carrying his own little wrench.

On the morning of April 28, 1973, a Saturday, Add Armstead woke Clifford before dawn so they could be at the yard to move cranes into place for a delivery. They walked a few blocks along New York Boulevard — known today as Guy R. Brewer Boulevard — when an unmarked car pulled alongside them. Mr. Armstead, carrying wages that he had been paid the day before, said he and Clifford ran, afraid that they were going to be robbed. Hearing shots, he flagged down a patrol car, not realizing that Clifford had been felled.

Mr. Shea testified that he did not realize that Clifford, who stood just five feet tall and weighed less than 100 pounds, was a child. After the shooting, prosecutors said, Mr. Shea’s partner, Walter Scott, was recorded on a radio transmission saying, “Die, you little,” adding an expletive. Mr. Scott — who by coincidence has the same name as the man killed in North Charleston — denied it was his voice.

Clifford’s death sent his mother, Eloise Glover, into a tailspin.

“My mother turned on my father — ‘Did you have a gun, they said you had a gun,’ ” Darlene Armstead said. “It caused them to break up. My mother lost her mind.”

The family received a settlement from New York City that, in the memory of the children, came to about $50,000, most of which the mother lent to local churches but never got back.

“My mother didn’t want no one to know when she going outside,” Ms. Armstead said. “She always used the back door.”

Ms. Armstead recalled sleeping nights on chairs in hospital emergency rooms while her mother was being treated, and living off restaurant handouts. “She was going to pay this guy to board up the house and she would pay him to bring the food to us,” she said.

The children went to foster care and group homes. One brother was in a psychiatric institution for about 10 years. Her mother, who had diabetes, died in 1990 at age 54.

Add Armstead died in 2005, at 83. “They put guns on him; they said he had guns at work, at home,” Kenneth Armstead said. “To demonize him would help Shea’s story.”

Mr. Shea, who moved out of the state after his marriage broke up, could not be reached. “I’ve lost it all,” he told the author Thomas Hauser, whose 1980 book, “The Trial of Patrolman Thomas Shea,” is a comprehensive account of the episode.

The defense lawyer, Mr. Evseroff, said a video would have changed nothing. “The case was resolved as a result of a trial,” he said.

For Mr. Adams, the quick termination of the South Carolina police officer in the shooting this month of Walter Scott was a positive step.

“That mayor said: ‘You know what? It has just gone too far,’ ” Mr. Adams said. “The pathway of Shea’s bullet physically stopped when it hit Clifford Glover, but the emotional pathway probably still continues to this day.”