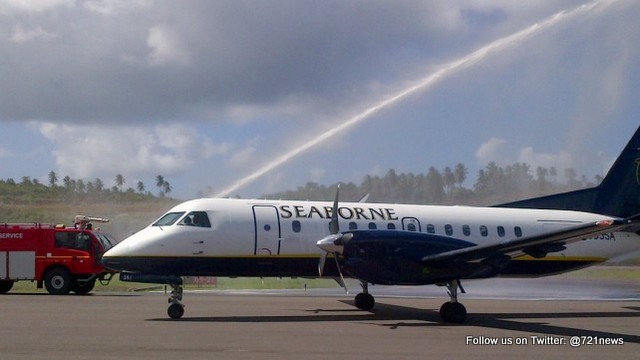 Dominica — Seaborne Airlines will now be serving Dominica from San Juan seven days a week as the company offers increased flights into the island.

The airline will also, as of June 7, 2015, be having a change in schedule which Tourism Minister, Robert Tonge, said will provide convenience for travelers who wants to get to Dominica in one day.

“In addition to the increased capacity, effective June 7, 2015, Seaborne will now depart San Juan at 4:10 pm and arrive in Dominica at 6:00 pm.” he explained. “The aircraft and crew will overnight in Dominica and Seaborne will depart Dominica at 7:00 am and arrive in San Juan at 8:45 am. This change is significant to providing convenience to travelers in making connections and getting to Dominica in one day and to make earlier connections outbound.”

He stated that the new schedule will provide a 41 percent increase in connections to the US.

“Seaborne has operated as the American Airlines affiliate into Dominica since the pullout of Eagle in April, 2013,” Tonge said. “A customer can accrue and redeem AAdvantage mileage on Seaborne to and from Dominica, so long as the reservation is booked through AA.com or on American Airlines through a travel agency.”

He added, “Seaborne also offers interline connections to JetBlue, Delta and United Airlines at San Juan. Seaborne flights can be booked via jetblue.com and delta.com, or through a travel agent.”

He said Seaborne has great schedule dependability, with 86 percent of many thousands of flights in the first quarter arriving on time.

“This is above the industry average for dependability,” Tonge noted.

He stated that the authorities on the island have been advised that Seaborne is offering fares from Dominica to San Juan starting as low as $145, based on availability.

Tonge also said the new services will increase the capacity of seats into and out of Dominica by 1,768 annually.