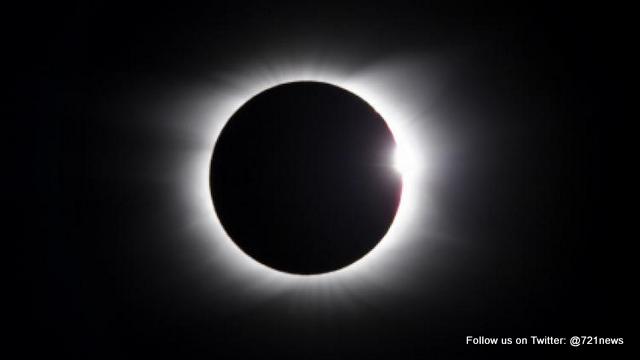 Millions of people could witness the best solar eclipse in years seen from the UK and northern Europe later.

A path across the Earth’s surface will be plunged into darkness as the Moon covers up the Sun.

The event’s geometry means that in the UK the Sun will be between 83% and 98% covered, from about 09:23 GMT onwards. The weather will determine visibility.

Experts are warning people not to look directly at the Sun because it could cause serious harm.

The deep shadow forms first in the North Atlantic, before sweeping up into the Arctic Circle and ending at the North Pole.

The UK will not see a solar eclipse on this scale again until 2026, but the British forecast is not particularly encouraging.

Nonetheless, all parts of the UK are in line to see at least 83% of the Sun’s disc obscured by the Moon.

The eclipse is a morning show.

The exact moment of greatest darkness for UK skywatchers will be dependent on the location.

Penzance, in Cornwall, for example, has this moment at 09:23 GMT, whereas for Lerwick in the Shetland Islands, it happens at 09:43 GMT.

For the Shetlands, the eclipse is very nearly total at 97%.

However, few land areas fall directly in the path of the Moon’s deepest shadow – its so-called umbra, and seabirds will probably get the best eclipse experience.

The longest period of darkness – nearly three minutes – will occur over a spot in the Arctic Ocean at 09:46 GMT.

Many professional and amateur astronomers have positioned themselves in the Faroe Islands, where the capital city of Torshavn gets totality for a full two minutes, beginning just before 09:41 GMT.

And those who could not book a flight or a hotel for the Faroes have gone to Svalbard, where the capital city of Longyearbyen witnesses two-and-a-half minutes of totality, starting shortly after 10:10 GMT. 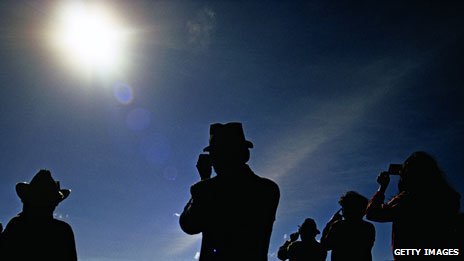 How to watch the eclipse safely

Why don’t we see an eclipse every month?

Wherever people view the eclipse, they are strongly encouraged to do so in a safe way.

For many, this will be the first such event they have experienced while owning a smartphone, and they may be tempted to use the device to get a shot of the Moon passing in front of the Sun.

This action is not dangerous, but there is a risk of looking into the Sun around the edge of the phone as the screen is lined up.

It would be much safer, say experts, to go to one of the many well-organised public events where there will be specialist telescopes, solar eclipse viewing glasses and simple pinhole projection cameras.

The internet will be a good option, too, especially if the weather disappoints.

Scientific agencies have planes and even satellites gathering video to relay on the web and on television.

The weather always has the potential to play spoilsport, and early forecasts suggested thick cloud would cover much of the UK at the critical times.

A cold front is pushing south over the country and it may be that only a lucky few – most likely across the English Midlands and perhaps north-east Scotland – will get a glimpse of clear skies.

Irrespective of the cloud cover, scientists say citizens can still help them with their research.

A University of Reading team wants to learn more about how the atmosphere behaves as the Moon’s shadow runs over the Earth.

Prof Giles Harrison explained: “This is the first big partial eclipse to happen in the UK since 1999, and the next one isn’t until August 2026, so this is a once-in-a-generation opportunity.

“By observing what happens on Friday we are effectively turning the skies of Britain into a giant weather lab, giving us a rare chance to see what happens when you ‘turn down the Sun’.

“This will give us a precious insight into how the Sun influences the clouds and wind, as well as more obvious effects, such as temperature.

“By improving our understanding of how the weather works, we’re better able to predict it, meaning scientists can further improve weather forecasts.”

One phenomenon the experiment hopes to investigate is the “eclipse wind”.

This refers to changes in the breeze that eclipse observers have reported as darkness falls.

Oxford University scientists are using the event to try to understand how eclipses affect electricity grids.

The deep shadow will reduce the output from solar panels, which now supply a significant proportion of power needs right across Europe.

The researchers will look to see how this dip in performance impacts the stability of grid networks.

Next year will have a total solar eclipse too.

That will occur on 9 March, and will cross Sumatra, Borneo, Sulawesi, and extend out over the Pacific.