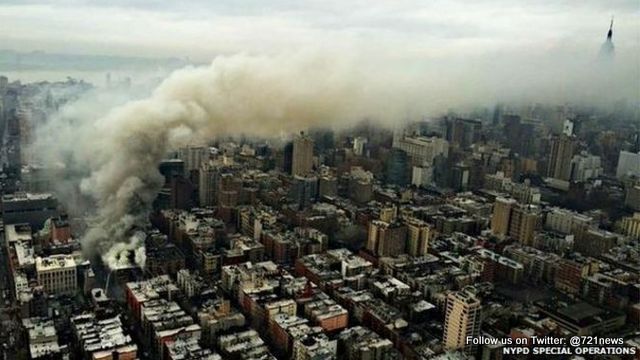 NEW YORK — At least 19 people have been injured after an explosion caused two buildings to collapse in New York City.

On Thursday afternoon, more than 200 fire-fighters converged to battle the resulting blaze that affected four buildings.

Mayor Bill de Blasio said there were no reports of missing persons, but noted that the situation was fluid.

Officials said they believe work was being done to the building’s gas utilities before the blast.

The explosion triggered a fire in a building that housed a sushi restaurant. The blaze then quickly spread to adjacent buildings, official said.

Emergency dispatchers started received calls reporting the incident around 15:17 local time (19:17 GMT) and emergency services were on the scene in about three minutes, city officials said.

The buildings on Second Avenue at East Seventh Street are near New York University and the Washington Square Park area.

Manhattan’s East Village is a neighbourhood of small businesses, restaurants and apartments. Thick plumes of dark smoke could be seen across Manhattan on Thursday.

Ben Mackinnon, 28, said he was drinking coffee in a cafe when he heard an explosion from across the street.

“The explosion was big enough that the door of the cafe blew open,” Mackinnon told Reuters.

Outside he saw several bloodied men emerge from the sushi restaurant.

Adil Choudhury, who lives nearby, told the Associated Press that he heard “a huge boom”.

“Already there was smoke everywhere” when he saw the building, he said. “The flames were coming out from the roof. The fire was coming out of every window.”

Officials remain concerned about the area’s air quality, and told residents to keep their windows closed.

The fire happened little over a year after a gas explosion in a building in East Harlem killed eight people and injured about 50.