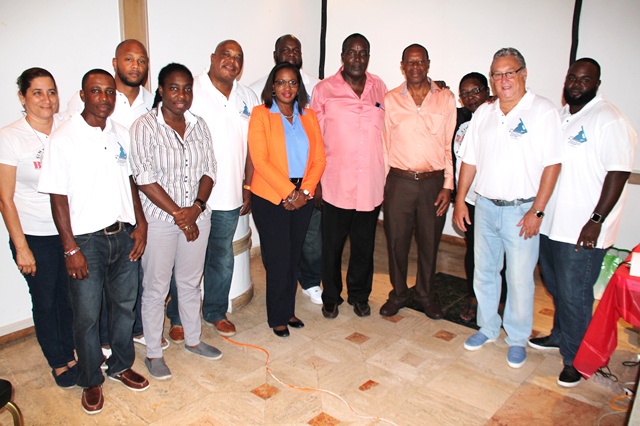 The ceremony was opened by Carlos van Heyningen, president of the St. Maarten Baseball Federation, who gave a brief overview of how the federation came about to start the Academy.

He was followed by a presentation by Director of the St. Maarten Baseball Academy, Coach Tony Rombley, alongside Agnes De Polo, and Rick Midanik, who entertained and informed invited guests, parents, and players, of the objectives and goals of the academy.  De Polo also informed the parents and players, that in the event help is needed with schoolwork, the academy is also there to assist with education as well.

The Minister was pleased to be in attendance at the launching of the baseball academy and was pleased to see the age gap being bridged. Coach Rombley explained the ages of the St. Maarten Baseball Academy were from 6-18, therefore filling the gap between 16-18, as the Little League and Pony League discontinues for most players at age 16.

The Minister was enthusiastic to see some camaraderie and competition amongst the players. “I am happy to see that athletes from both the Pony and Little Leagues are coming together. I think St. Maarten is too small to be living in separate lines, so the more they mix, the more we get to see the real best of the best on the island,” the minister said.

A few players, who agreed with the comment, when it came to scouting the best of the best, applauded the Minister. The Minister is also very pleased with the components that the academy aimed to offer, stating, “Those components, such as confidence, discipline and team work can be carried on to the next level into life, not only in baseball.”

The Minister reiterated to the players to always remain focused on their education, jokingly adding, “You don’t only need to know how to count the money, but to read the contracts to make sure your lawyers aren’t making more money than you.”

Minister Jacobs encouraged excelling in education, as education has its place, but recreation (sports and arts) also adds value to the development of a well-rounded person. She stated, “Sports saves lives too.”

The Minister hopes that the females will also get the opportunity to excel, whether in baseball or softball. She lastly, encouraged all the players and the coaches to keep up the good work, and wished them much continued success in achieving their goals for the academy.