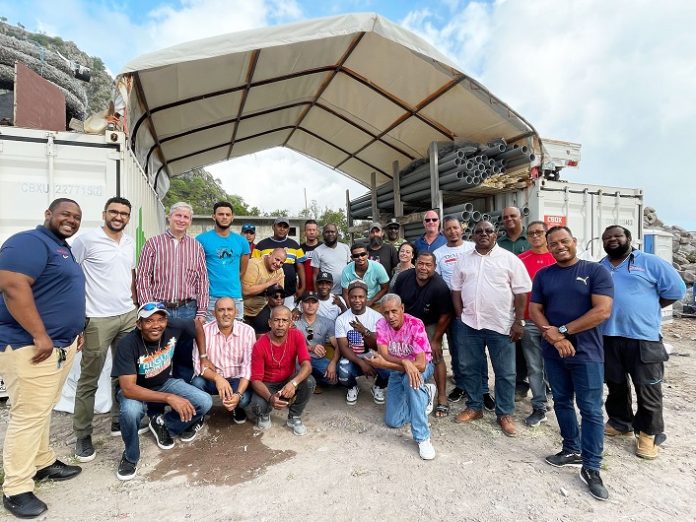 SABA — The highest point of all three apartment buildings of the Under the Hill project was celebrated with the workers on Tuesday, July 19th.

The principal of the project, housing corporation Bazalt Wonen from the Netherlands, Public Entity Saba and the main contractor Van Boekel, invited the close to 40 construction workers for a small celebration at the depot site close to the area where the project is being constructed.

“As principal, we find it very important that the people who have been working hard on this project to get the recognition that they deserve. We have reached the highest point of all three buildings and that is reason to celebrate,” said Maarten Koster of Bazalt Wonen.
Island Governor Jonathan Johnson was present at the event, as was Commissioner of Public Housing Rolando Wilson and Own Your Own Home Foundation (OYOHF) Director Eviton Heyliger. Johnson thanked the men in a short speech. “We are appreciative of your work. All three buildings have reached the highest point, and we are very proud of that. There is still a lot to be done, but together we will get there,” he said.

The 18 apartments will be delivered and ready to be rented out by the local social housing foundation OYOHF by the end of this year. The three buildings contain three 1-bedroom apartments, three 2-bedroom apartments and twelve 3-bedroom apartments.
Commissioner Wilson congratulated the companies and the group of men with this milestone. “You have worked hard and I’m sure you will continue to work hard to get this project completed. This is an important project because it will help to alleviate some of the burden for people who are in dire need of housing,” he said.

Funding for this project came from the European Union (EU), the Dutch Ministry of Home Affairs and Kingdom Relations BZK and Bazalt Wonen, formerly Woonlinie. The Public Entity Saba assisted with the transfer of 18,000m2 of government owned land to the OYOHF.
The main contractor for this project is Van Boekel along with various subcontractors. The groundbreaking for this project took place in December 2018. The project has been challenging due to difficulties in the excavation of the very steep hillside and delays caused by the COVID-19 pandemic.