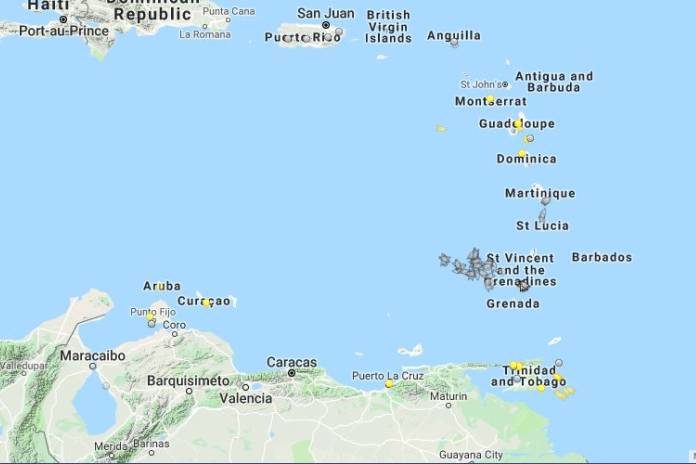 ST GEORGE’S, Grenada — According to a YouTube video, an American fleet is advancing towards Venezuela and at this moment is parked off the coast of the island of Grenada. However, locals who frequently travel through the area, from fisher-folk, persons that use small aircraft, to officials with regional carrier LIAT have not seen or confirmed anything that the video in question suggests might be taking place.

The 12-minute video, posted over three days ago, is going viral as it shows the marine vessel tracker “Marine Traffic” using its filter features to claim that the ships highlighted in grey must be naval warships because they are unspecified and have no distinguishing features that show up on radar.

However, a closer examination of the marine traffic in the particularly area around Grenada and Venezuela shows that some of the ships in grey that are supposedly unspecified actually appear to be an assortment of pleasure craft, small trading vessels and other “unregistered” craft as small as fishing boats and skiffs.

Further, reports that some 30 US Navy vessels (representing over ten percent of the entire US Navy) have somehow sailed into the area unobserved are, to say the least, unrealistic.

Hitherto, the US Navy has had no presence whatsoever in the region, with the sole exception of its humanitarian relief vessel USS Comfort, and the US Coast Guard had just six cutters deployed to cover the entire Caribbean.

In September, the Council on Foreign Relations Latin American specialist, Shannon O’Neil, highlighted the potential risk of a US-led invasion of Venezuela and said that it is “unrealistic and would be counterproductive”, despite ongoing calls for the US government and President Donald Trump to conduct a military intervention – even after leaked conversations about a possible invasion between Trump and military staff became public.

A US-led invasion of Venezuelan also has strong support from US senator for Florida, Marco Rubio, and the Organisation of American States (OAS) secretary general, Luis Almagro.

O’Neil, however, highlighted that not only would a US invasion of Venezuela be unpalatable for American citizens, but an invasion would need a similar size troop size as that of the Iraq invasion in a slightly larger country.

Also, as a practical matter, US troops would not be generally welcomed in the country by remaining residents amidst the crisis and economic blight, as recent polls indicate.

Venezuelans are heavily armed and, due to the collapse of the government and state apparatus, have resorted to Afghan warlord fiefdoms and criminal, Mafioso style enclaves, which leaves American troops at the risk of long and burdensome guerrilla warfare in a dense jungle with permeable borders.

Also, regional support from other Latin American and Caribbean nations is not at all sure, with the fallout unpredictable and alliances unreliable.

Coincidentally, there is a Chinese naval vessel called the “Peace Ark”, a military aid ship and floating hospital, docked in Grenada and set to leave the island on Monday afternoon after making an additional earlier stop in Venezuela in the latter half of September to assist with humanitarian issues in the beleaguered country.

As for the efficacy and use of the marine traffic website, the US Navy did start using automatic identification system (AIS) transmitters after several fatal collisions between US navy ships and other civilian craft.

The AIS transmissions of US naval ships can be tracked, along with thousands of civilian ships, but will only take place when the US Navy ships are in waters that have high volumes of traffic such as ports and major sea lanes.

The US Navy will reportedly discontinue and deactivate broadcasts once the ships reach open or less crowded waters, and would most likely deactivate tracking during times of war or other military incursions and support efforts. (Source: caribbeannewsnow.com)

This is the video: