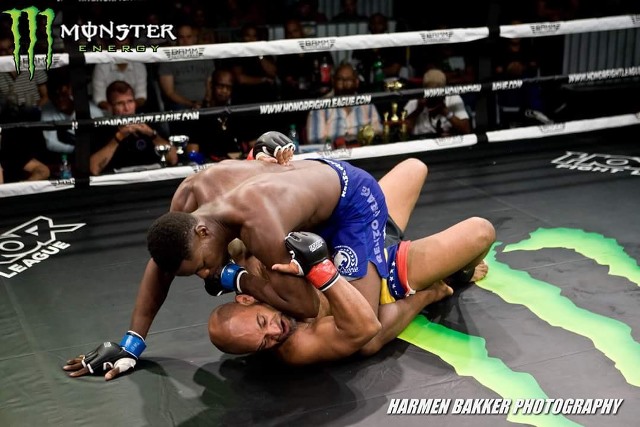 Charlie Marsham who trains out of Marco London’s Team Sityodtong, St Peters location defeated Richard Frias from Venezuela. The fight was set at 79kg Thai boxing B class bout. Marsham won the fight after landing a vicious knee to the head and followed up with pressure attacks, the fight was stopped in the 3rd round by technical knockout (TKO).

Avish Dilen, a 17 year old student under Akeem Lewis in Cole Bay defeated Gaddy Rodrigues of Venezuela. The bout was at the N-class level. Gaddy came out aggressive in the first round but Avish stayed composed and listened to his corner, coming back to take over the fight and pressure his opponent and got the win by unanimous decision.

A long time student under Sensei Marco London, Akeem Lewis is the head Muay Thai Kickboxing instructor at SXM BJJ Renzo Gracie in Cole Bay. Akeem Lewis went up against Stevin Berbin of Venezuela in his Professional MMA debut in the middleweight (84 kilo) division. Stevin took Akeem down in the first round and kept a good pressure from the top position. Staying focused and relaxed Akeem was able to defend and fight off Sevens attacks. In the second round Akeem used his Jiu Jitsu skills (Akeem holds the rank of purple belt) to get to the top position and started his attack, proving to be too much for Stevin he tapped to ground and pound strikes. Akeem was also awarded KO/submission of the night.

Muay Thai kickboxing classes are given in both St Peters and Cole Bay. Classes take place at MPC gymnasium Mon/Wed/Fri 7:30-8:30pm. For more information or to register for classes with Sensei Akeem Lewis in Cole Bay contact info@sxmbjj.com or call 721 544-4444.