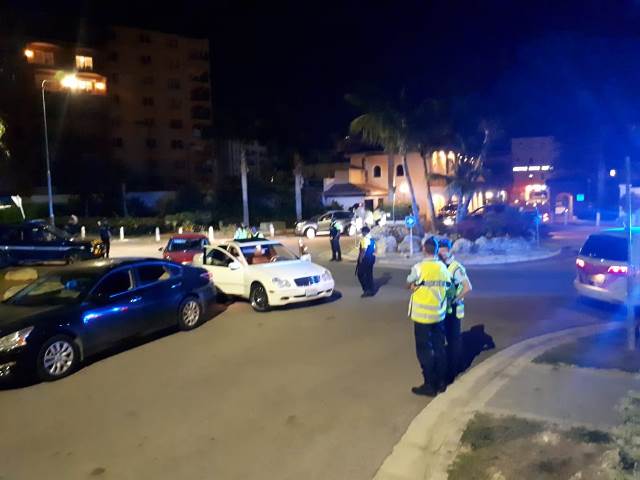 ~ Doran was intoxicated and uncooperative with French authorities ~

At the border of Marigot and Cole Bay, an SUV was stopped by the French authorities during a control of the car. According to French law, based on what was witnessed by the officers, the driver was deemed to be intoxicated.

According to our source, the driver was identified as Chief Customs Officer Anthony Doran. Doran was uncooperative with the French lawmen, so they arrested him and handed him over to Dutch side police.

As soon the control ended, and the Gendarmes left the scene, Doran was placed in a police car and was driven to his home. He was never taken to the Police station, as is normal procedure when dealing with an intoxicated driver.

There was no official report on the arrest of the intoxicated driver of the night of Friday, August 10, between 10:00pm and into the early morning hours of Saturday, August 11.

Below you can read the police report on the joint island-wide border control.

The general joint controls, as announced in prior press releases, between the law enforcement departments from the French and Dutch side of the island consisting of the Gendarmes, the Custom Department, the Voluntary Corps Sint Maarten (VKS), the Royal Dutch Marechausees and the Police Force of Sint Maarten (KPSM) continued on Thursday, August 9 through Saturday, August 11, 2018.

The first controls started on Thursday, August 9, at 10:00pm and lasted until 01:30am on Friday, August 10. These controls were held simultaneously at four different locations border crossing locations with the following results;

A total of 67 vehicles were controlled, 19 fines were given, 8 vehicles were towed due to the lack of vehicle insurance and tint was removed from 19 vehicles. A total of 6 persons were arrested, 4 in connection with their legal status on the island, 1 for compulsory identification and one for public intoxication.

The controls continued on Friday, August 10, at 10:00pm and lasted until Saturday, August 11, at 06:00am. At total of 47 vehicles were stopped, 7 vehicles were towed, 6 fines were issued, tint were removed from 7 vehicles and 5 persons were arrested in connection with their illegal status on the island.

These general controls will continue as the working relation and cooperation between the French and Dutch law enforcement department continue to develop.