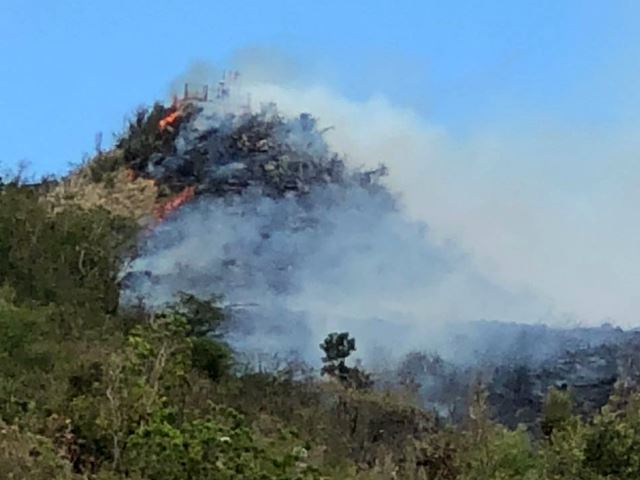 MIDDLE REGION, Sint Maarten — On Wednesday May 23rd at approximately 10.45 a.m. the Emergency Dispatch received the first of several calls reporting a bush fire in the vicinity of Madrid road in Middle region. The callers also stated the fire was rapidly spreading in different directions due to the constantly changing wind direction.

Police patrols along with fire department immediately went into the area where the fire was reported. On the scene the investigating officers realized that the fire had become quite large and that it was threatening homes and other buildings in the area. The fire had also spread into Garden of Eden in Dutch Quarter.

At one point fire seriously threatened the building where the antenna belonging TELEM is situated at the top of the hill along with two fuel tanks.

The situation was constantly monitored by the police department from the air by the use of drones. Due to the good working cooperation with the Fire department the fire was under control after approximately two hours.

However due to difficulty in reaching certain areas where the fire was burning it took a little bit more time to completely extinguish the fire. No buildings got damaged and no-one was injured by the fire.

The Police Department is sending out a message to the community with a stern warning not to light any fires or to burn any garbage because of the very dry season and high winds we are experiencing at this time. These fires may accidentally get out of control, spread rapidly and cause unnecessary damage buildings, animals or even threaten the lives persons.