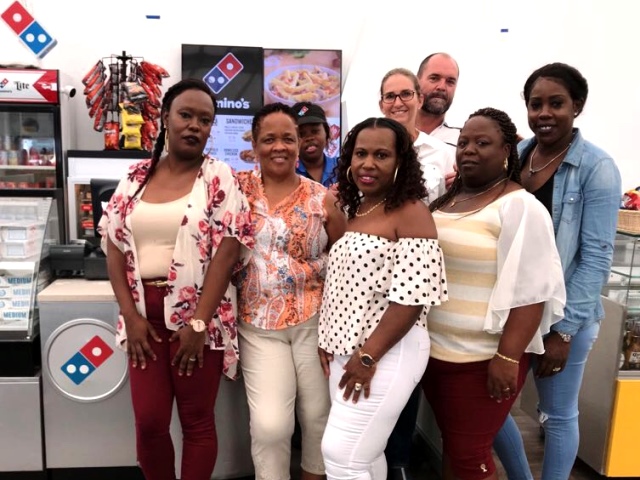 LAS VEGAS, US — On Saturday May 2, 2018, ten Key Domino’s team members are headed to the World Wide Rally to be held at the Mandalay Bay during the next week. Domino’s holds these rally’s every other year and is attended by ‘Dominoids’ from all over the world.  The attendance this year is expected to be a whopping 10,000. The idea is to Celebrate and award the efforts, results, further the training and knowledge of all those who attend.

“Each Rally we try to bring 6 of us, but this year after Irma and all the hard work that our dedicated team members put in during the aftermath, we decided to dig deeper in our pockets and find a way to bring a few more. Sadly we can’t take everyone and many well deserving team members will perhaps get the chance to attend the next one,”  Said John Caputo, the local Domino’s franchisee. “The efforts of what the Domino’s St. Maarten team accomplished after Irma being the first to Open; not to sell but to give didn’t go unnoticed by Domino’s Corporate as St. Maarten is also set to be featured in a video about the island’s recovery and how our team members rallied to help within the community and each other. The Domino’s World also responded to provide assistance to them thru an internal program called “Partners. Team members helping team members”. Relief assistance was provided to the whole team to help them rebuild and replace what they had lost,” John continued to say.

The attendees will be immersed in the latest Domino’s training, awards, presentations, and celebrations which cap off with a closing party featuring a concert by Earth Wind and Fire. In all 10,000 Dominoids from around the world will attend and this certainly will be great exposure for St. Maarten since we are being featured.   John Caputo is also a presenter in a break out session about thinking and marketing outside the box; taking risks. The session has been booked up to room capacity. Pizza delivery by Jet pack and delivery via Winair and Post Irma efforts will surely be shown.

“Last June, St. Maarten hosted a smaller regional conference and the attendees from Latin America, South America, Canada, Alaska, Hawaii, and the Caribbean and they saw St. Maarten at our bery best as the island as a whole really rallied to make it the highest rated regional meeting to date. Then just a few short months later they saw an Island devastated.  I can’t wait for them to see how we are bouncing back and how trying times can bring out the best in people.  I’m certainly proud that my team will be recognized for their efforts,” John continued to say.

There is a lot to celebrate this year as Domino’s worldwide has become the largest pizza company in the world surpassing Pizza Hut relating to market share and volumes; A goal that was expected to happen in 2020 but thru innovations, online ordering, and taking some risks came to fruition a few years early.   Domino’s operates 15,000 locations in 85 Countries around the world.