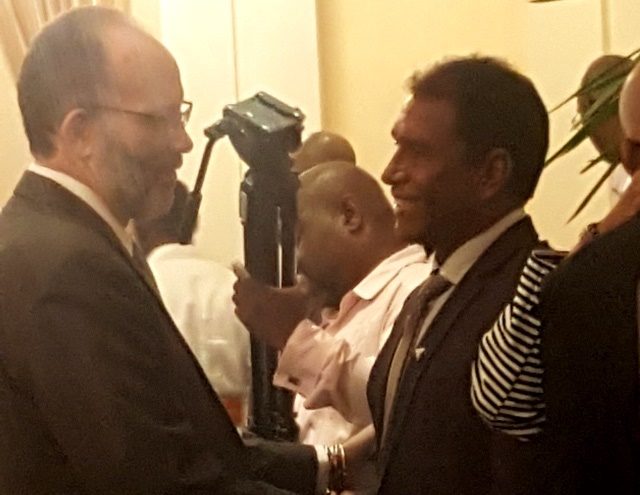 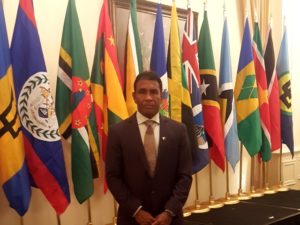 Nassau, Bahamas — On  the 7th and 8th May 2018, James Finies, Foundation Nos Ke Boneiru Bek ( NKBB) was  in the Nassau, Bahamas where Cofcor Caricom meeting was held at the Hilton. This expedition was based on the result of the meetings at the beginning of April with the assistant secretary general of Caricom Honorary Ambassador Granderson and vice-president of Guyana and Minister of Foreign Affairs Honorable Mr . Greenidge in Georgetown Guyana. NKBB travelled to the Bahamas based on their statements where they indicated publicly that they would not hesitate to call on us if further explanations are needed because of the atrocities that Holland are committing against us.

Finies met with many Caricom countries, ambassadors, lawmakers, human rights lawyers etc of Bahamas during these days whom were in disbelieve that in this 21st century and its own backyard of the Caribbean Bonaire and the Statian peoples are under colonial rule and all of deemed this as unacceptable.

The support and solidarity of these Caricom countries where overwhelming since most of them thinks Holland is one of the richest nations and the Bonerian and Statian peoples are enjoying the same richness with equal rights in the Kingdom of the Netherlands. Also for the first time the first time the Caribbean nations are hearing of the Sint Eustatius overthrowing of the Statia elected government and halting the upcoming elections of 2019 and were perplexed by this undemocratic situation in the Caribbean.

Mr LaRocque, Secretary General of Caricom emphasised and urged the people of Bonaire and NKBB to continue this right path of advocating the plight of the Bonerian of Statian peoples among the Caribbean countries.

The Caricom countries are important in Bonaire and Sint Eustatius quest to re-list on Non-Self-Governing-territories of the UN  and  then will fall under the protection of the UN Special Committee , the C24, and where Holland has to report back according to international law to the General Assembly of the UN. As all Caricom countries are members of UN General Assembly and all have voting rights to vote us on this of Non-Self-Governing-territories list.

NKBB will continue after Bahamas towards other Caribbean countries to promote awareness and solicit support and solidarity on the undemocratic situation and abuse of power from the Netherlands on the islands of Bonaire and Sint Eustatius.