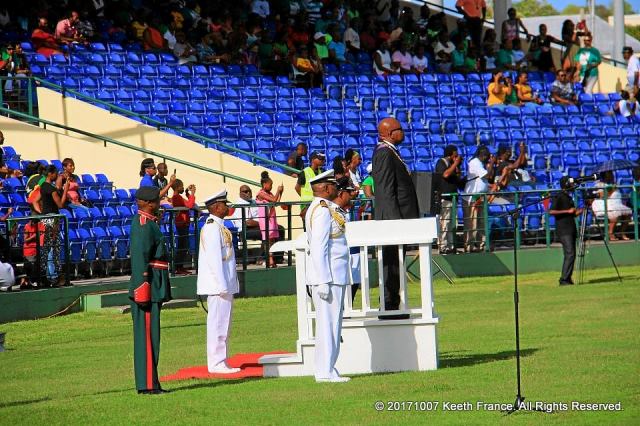 Although the day was declared a public holiday by Governor General Sir Tapley Seaton on the advice of Prime Minister Harris nearly 300 persons attended the military parade at the Warner Park Cricket Stadium. Several photos showing the low attendance and the empty seats have been posted on social media by professional and amateur photographers.

September 19th is Independence Day, but the parade had to be cancelled as Hurricane Maria passed well south of St. Kitts and Nevis on that day causing minimal damage.

The following day, September 20th was declared a public holiday.

In a national broadcast on September 23rd, Dr. Harris announced that the independence was important and that the Independence Parade, Toast and Cocktail Reception will be held on 7th  October, 2017 and the day was declared a public holiday, a decision which appeared not to have gone down well with the general public and the local business community.

Several businesses gave public notice that although Saturday October 7th was declared a public holiday, their doors will be open to serve customers.

In an effort to get the general public to attend the parade, the Team Unity Government used a public address system on Friday, through several communities inviting the public to attend.

The Communications Unit in the Office of Prime Minister Harris also issued news releases on Friday which showed Dr. Harris visiting areas of his constituency and publicly making promises to build homes.

But on Saturday the poor attendance was evident as the usually well-attended Independence Parade, only attracted less than 300 persons, among them visiting ambassadors and diplomats, the local diplomatic corps and members of the Cabinet.