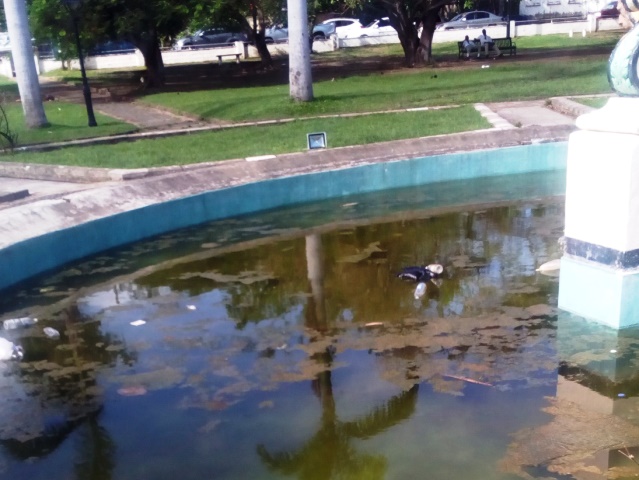 BASSETERRE, ST. KITTS, – One month after Hurricane Irma and 20 days after Hurricane Maria affected St. Kitts and Nevis, garbage was thrown and remained for weeks in The Fountain at Independence Square which has been filled with stagnant water and breeding mosquitoes.

Passers-by have been looking at the growing health hazard as plastic bottles, bags, styrofoam and other wrappings have been thrown into the water that surrounds the base of the historic landmark.

While some of the garbage has been removed from the moss-filled water, several tree trunks and branches of trees brought down by the both hurricanes remain on the ground at Independence Square.

With three cruise ships already visited, it remains to be seen how long the situation will remain.

Independence Square in Basseterre was named on the occasion of St. Kitts and Nevis achieving political independence on September 19, 1983.

Originally called Pall Mall Square, the area was first acquired in 1750 and it rapidly became the administrative, commercial and social centre of Basseterre.

The Square was the site of the slave market. Slaves arriving from Africa were temporarily quartered in the basement of a building on the south side