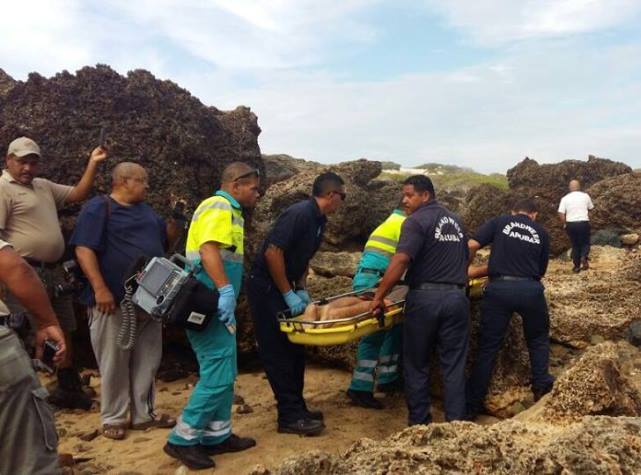 ORANJESTAD, Aruba — The Dutch Caribbean Coastguard in Aruba received a notification this morning that there were two Spanish speaking men seen in the area between Boca Prins and Dos Playa.

One of them was slightly injured and the other one was stuck between some rocks. Assets from the Coastguard, San Nicolas Police, Ambulance and Fire department were deployed.

Upon arrival to abovementioned location, both men were found. In a joint effort of the present services, they were able to free the man stuck between the rocks from his terrible situation.

He was badly injured. It was clear that they were undocumented Venezuelan migrants who attempted to reach Aruba through the north coast. Both men were transferred to the airport with the Coastguard helicopter where an ambulance was waiting to transport them to the hospital.

Upon further investigation of the Coastguard between the rocks, a buoy was found, a bag with narcotics and also three firearms. Based on this, both men were detained by the Police. De narcotics and firearms were confiscated and handed over the Unit Organized Crime (UGC) that is investigating the case.

Later today, a lifeless body was found in the same area. The body was confiscated. Further investigation must determine if the cases are related.