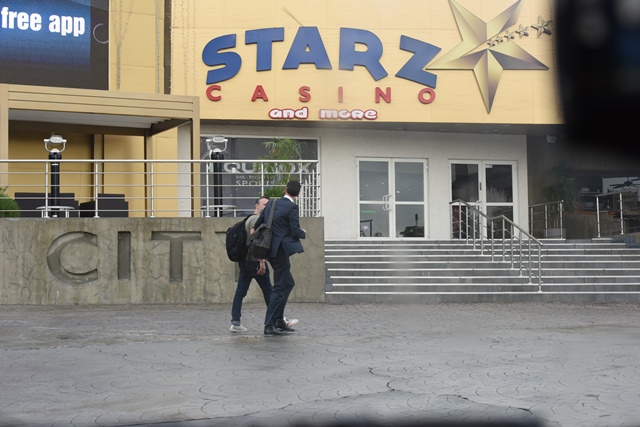 GREAT BAY – When de sun goes down today, casino owner Francesco Corallo will have spent 111 days in a cell of the House of Detention at the police station in Philipsburg. That’s 2,664 hours. Each day he is let out of cell for an hour – 30 minutes in the morning and 30 minutes in the afternoon. That leaves 2,553 hours of staring at the walls and wondering why on earth he has to be there.

On Friday morning I got access to Corallo – also for thirty minutes, after a battle with the bureaucracy that took more than six weeks and ended with a lawsuit against Minister of Justice Rafael Boasman and interim prison director Steven Carty that would have played out in court on the same morning if Minister Boasman has not made the arrangement two days earlier to accommodate my visit.

A police officer guided me to the back of the police station – the part of the building that faces the Pondfill Road – where the cells of the House of Detention are located. I was not allowed to bring a camera or recording equipment; just pen and paper, but the friendly officer did not allow this either; she presented me with a notepad and a pen of her own.

Inside the building, Corallo was waiting for me. We shook hands before he disappeared to his side of a small visitor’s room. In the center it is divided by a glass partition, and Corallo spoke with me through a microphone. The setting is sterile, yet somehow serene. At the same time it felt like I had landed in a scene from a bad American gangster movie.

Outside the officer and a colleague watch us, but the man who has been called all kinds of names in the media speaks freely.

He is dressed in an orange Nike running shirt and his steel gray hair looks well kept. No orange jumpsuit like in some American prisons and no shackles or handcuffs either. There is no anger in his eyes, as I more or less expected beforehand, but just a resigned expression, as if he has come to terms with the situation he finds himself in. Corallo began by setting the record straight.

“I have not been accused of money laundering and not of bribery either. “It is about a tax payment dating back to December 2006. We paid late, but we paid everything. We also paid our profit taxes in installments, the way it is allowed by law.”

When the RST arrested Corallo in December of last year with a lot of pooha – a video of the arrest was even sent to the media – the prosecutor’s office sent out a press release stating that Corallo had been arrested at the request of the public prosecutor in Rome on charges of tax evasion, bribery and money laundering.

The Italians also indicated that law enforcement could seize property from Corallo for up to $26 million. That resulted in the seizure of one casino, 170 apartments, a yacht, eighteen expesnive watches and several bank accounts. All of Corallo’s businesses are however still operational on the island.

The Italians then took their time to file an official request for Corallo’s extradition within the stipulated term of 40 days. That term ended in January and ever since Corallo and his attorney Peppi Sulvaran have been waiting for a date for an extradition-hearing in court.

A first short-notice date was refused by Sulvaran, because it gave him only a week to prepare, Corallo says. The second date, May 2, was also not good because on that day the court is closed for the Carnival Day holiday. A new date has not been set yet.

Corallo has asked in the earlier stage of his detention for a transfer to the Pointe Blanche prison, but that was denied. “Most of the guards here are treating me okay,” he says, “but I never see a doctor here.”

That could cause issues, because Corallo’s blood pressure is somewhere around 110-130. “They measure it maybe once every two weeks,” he says. “In Pointe Blanche there is a doctor and there are activities.” Corallo also has dental issues that require specialist treatment.

For these reasons, there are two closed-door hearings in court tomorrow afternoon, whereby his attorneys Eldon ‘Peppi’ Sulvaran and Shaira Bommel will ask for the suspension of his detention until the extradition hearing and, if that does not work, for his transfer to the Pointe Blanche prison.

Asked how he is holding up, Corallo says: “Very bad. I do not understand why I am here.”

He has access to newspapers but apart from that the days are dull. “I know everything that is written on the walls in my cell by heart. What I do all day? Nothing. I think.”

Corallo wants to get through the court procedure as soon as possible. At the same time he wonders why he has been targeted. “Why only me? Everybody is doing the same thing.”

The casino-owner says that he thought the Dutch justice system was better than what he is experiencing right now. “One hundred and ten days and I don’t even know a court date. They don’t even do that in Africa. And you know why I am not allowed to go to Pointe Blanche? Because the director is corrupt. But what does that have to do with me?”

When Corallo became news with a supposedly crooked loan from the Banca Popolare di Milan (BPM) in 2012, he suggested that his competitors in the Italian gaming market were behind it.

Are they maybe at it again this time? Corallo’s company BetPlus controls 75,00 video slot machines in Italy and his competitors would love to see him go down and grab a piece of this highly profitable cake.  “I cannot prove that of course,” he says with a little smile on his face. “But it is certainly a possibility.”

As if his own troubles with the Italian justice system are not enough, Corallo’s ageing father Gaeto suddenly came into the picture in November of last year with a lawsuit, demanding between $10 and $20 million in compensation for alleged theft of his properties by his son.

Corallo sighs. “I’d rather not talk about this,” he finally says. “But this is a sad story. My father is old and there is really nothing to it. I do not understand why Roland Duncan (the attorney for Corallo Sr. – ed.) is doing this.”

Corallo’s businesses, like the Starz Casino in Cupecoy, are still operational. They are managed by his corporate attorney Roy Moes. “But he needs guidance, he is a corporate lawyer, and I am only allowed to see him once a week.”

Since Corallo is not just any detainee, his safety at the House of Detention is also an issue. “In my cell I feel safe, but it also depends on who is in there with me. Some people have mental issues and that makes it at times unsafe for everyone.”

A final message for the people who keep his businesses going and for the community? Corallo: “I just want to be done with all this. I want to thank all the people who kept supporting me. I want justice to be brief and fair. Nobody understands why I am here. And one day I will be acquitted.”