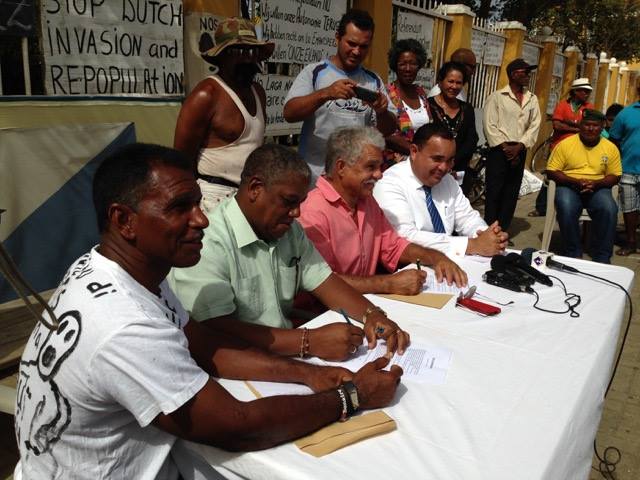 Now that the current YES-government of tolerance has come to an end, the opportunity rises for Bonaire to have a government that follow the direction that the Bonerian peoples have indicated in the referendum of December 2015, where as never before the Bonerian peoples united and massively rejected the actual colonial status. Fact is that shortly, beginning of coming March, the 2nd chamber Dutch elections will be held, and after the elections the new government of Holland is free to make the second reading to finalize the embedding of us as colony under legalized racism and apartheid conditions in their constitution.

Meanwhile, it has been clearly exposed that Dutch politicians did not and will not let loose of their past and roots as colonizers, and have not shown signs to have consciousness or human feelings, and neither are respecting democracy nor the rights of the BES peoples, including the Bonerian peoples. We are left with no other possibility than to seek other alternatives, other avenues to realize our rights anchored into international treaties.

After the Bonerian and St. Eustatius peoples have spoken clearly in their referendum that they do not want to continue this direction, the current colonial constellation, we have noted and experienced that on St. Eustatius their government has followed the mandate of their peoples, and have started the process to exit the BES, and are aspiring and are working on their own constitution for a new autonomous and associated relationship with Holland in the Dutch Kingdom, according to norms and standards of the United Nations.

On Bonaire the opposite is the case where the YES-government, which has campaigned publicly against the decision of the Bonerian peoples, which with 65% of NO-votes has rejected the actual status and together with the Dutch government have decided to violate the rule of law and democracy, and start the process to anchor, embed unilaterally the Bonerian peoples against their wish and decision in the Dutch constitution. The actual governments of Bonaire and Holland are violating, and are not complying with their duty as government, to respect, protect and fulfill the treaties, resolutions and human rights of self-determination and right to development of the Bonerian peoples.

This is a crucial moment in our history. Looking what is ahead of us and because of the burden and consequences of embedding of our peoples in the Dutch constitution, we are making a dramatic and urgent call on the fraction of the Democratic party, especially their leadership, to put aside their personal and internal issues and unite back with the peoples, unite back for Bonaire and together with fractions of UPB and Raphaela, which are not supporting anymore the YES-government, and start the process same as St. Eustatius to re-enlistment as a non-self-governing-territory and get guidance and protection of the United Nations, and exit BES, which has resulted in a complete failure, and realize the wishes, decision and rights of the Bonerian peoples.

You can count on the support of our brothers in the Kingdom and also from the international community to help the Bonerian peoples with a fair and just process to realize their right to self-determination and realize their self-government same as St. Eustatius in the Kingdom with alliance and protection of our brothers and according to norms and standards of the United Nations. Respecting, protecting and fulfilling as government, the Bonerian peoples’ inalienable rights to self-determination and right to development, we finally could experience and enjoy our fundamental right to freedom and equality that will ensure the welfare and happiness of the Bonerian peoples in the Dutch Kingdom.