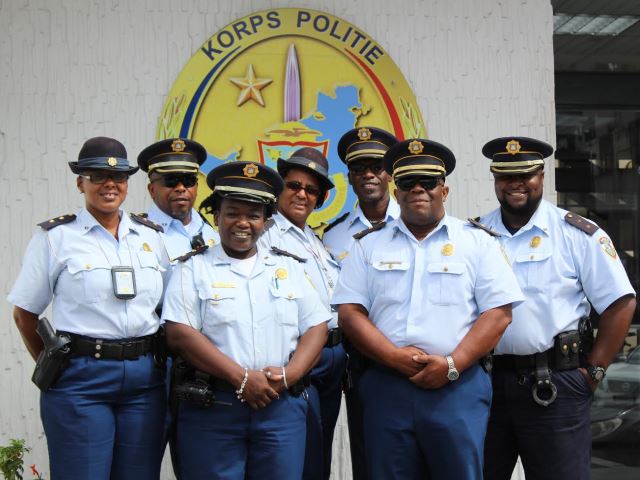 PHILIPSBURG – Tuesday, February 7, marked the kickoff of the Cops & Kids program in the primary schools.

The first module, “One on One” will be conducted in the month of February. For this particular session, students had 2 weeks in January to write down any questions, anonymously if they wanted to, of interest about the CPOs, their work, lives and the Police Department. Those questions will now be answered during the visits to the schools.

School Boards and School Management were informed during the first school trimester, and teachers were invited to an information session in January, at which time the program was explained, questions were answered and schools that were interested in participating, signed up for the first two modules (Feb & Mar).

Eighty percent of primary schools (16 of 20) have chosen to participate. The sessions will be conducted in the 16 schools by 7 Community Police Officers; Carty, Chandler, Crispulo, Rensley V. Henson, Josepha, Arcella V. Leonard and Helen S. Romeo with support from the Head Inspectors Bell and Marie N. Gittens.

The value of the Cops & Kids program is multi-tiered as both the CPOs and the students will get to know each other past being “a face in the crowd.” Both groups may have opinions about each other based on rumors about others. This program will allow them to get to know each other “for themselves” and separate truth from opinion. The presentation of this first session allows the students to see the officers first as human and then as protectors.

“Our Police Department is not perfect, but they do work hard and the safety of the people and country remains their priority. To stand vulnerable in front of students helps and encourages students to establish a healthy self-image, they understand that they are good enough. They are reminded that despite making mistakes, their mistakes do not have to shape their future, they are not the sum total of the mistakes that they have made. We don’t want students to end a chapter in their life prematurely just because things have taken an unwanted turn. Instead, we are striving to encourage them to ride out the storm and grow from any challenges that are encountered. In their grammar lessons they would have learned how to use a period and a comma. The first denotes the end of a sentence, the other requires that you pause and then continue. In the ‘real world’ the same hold true. In many instances it would behoove us to pause, breathe, pull our thoughts and emotions together, and continue with our lives,” a release said.

“It has become obvious that the mindset that caused the escalation in student conflict will not be the mindset that reduces or eventually eliminates it. It is a problem that needs to be addressed before the problem even presents itself in the secondary schools. Cops & Kids addresses school-aged citizens as members of the community who are responsible, caring and community-minded.  The program does not take into consideration that in the opinion of others this may not be true of our students. The program is written to approach students as we see them in the near future (responsible, caring and community minded). Our expectations of them as citizens will be a contributing factor in their roles and productivity as contributing citizens. The program is not written to expose the weaknesses or shortcomings of the students. It is obvious that those exist.  There is no value or purpose in holding what they cannot do against them or causing them to feel ashamed,” the release continued.

Cops & Kids was written to highlight and emphasize students’ strengths as individuals and as teams, and ultimately bring the teams together as a group. The focus is to inject their self-esteem with an improved perspective of themselves. “People who like themselves are less likely to be aggressive with others while in contrast hurt people. It won’t be all rainbows and popsicles and it is expected that moments of conflict will arise, but those will make for teaching opportunities. We are documenting the program with photos so that the community is able to see these groups of citizens go through the process of not just becoming responsible citizens, but understanding why that is important,” the release said.

“What excites us the most about Cops & Kids is that it is not a boxed product with a shelf life and an expiration date. It is not a one size fits all products. Every single component of this product was tailor made for our students. It is a living product and is customizable to the students in our schools. It can grow with our students and what they learn in the course of the modules will serve them well as they choose how they will be molded,” the release explained.

Once students have concluded their Exit Examinations, the remaining 3 modules will be conducted. They will participate in an Open House, an all schools debate and a Sports Day where they will compete against other schools and hone their good sportsmanship skills.

The program is set to conclude in June, at which time it will be evaluated by parents and members of the community who would like to contribute to the development of the program. Students and teachers will complete surveys at the end of each program and that feedback will be added for overall improvement.