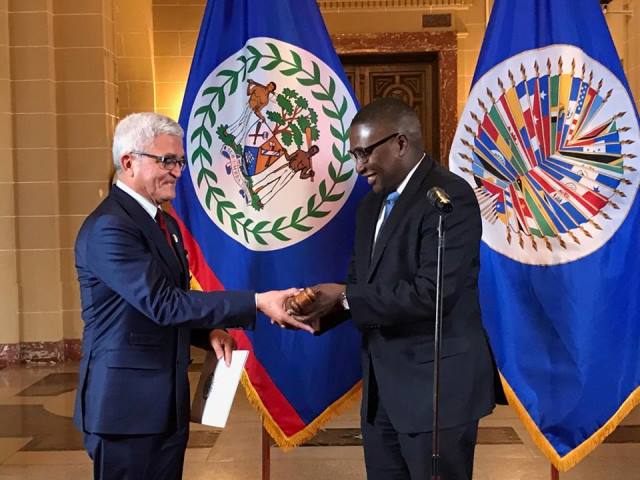 Washington, D.C., —  The Permanent Representative of Belize to the Organization of American States (OAS), H.E. Patrick Andrews today assumed the Chairmanship of the Permanent Council of that hemispheric institution.

In his remarks on the occasion, Ambassador Andrews underscored the importance of continuing to build on the four fundamental pillars of the Organization: Integral Development, Multidimensional Security, Human Rights and Democracy to seek tangible results for all the citizens of the Americas.

Upon receiving the gavel that represents the Council’s authority from his predecessor, the Permanent Representative of Barbados H.E. Selwin Charles Hart, Ambassador Andrews expressed that during his tenure as Chairman he would work towards the advancement of Sustainable Development for Economic Growth, pressing for tangible results in the areas of the environment, social inclusion and economic development.

Ambassador Andrews added that the priority issues that the Council will address in the upcoming months include the preparations for the 47thOAS General Assembly to be held in Mexico in June, the institutional development of the OAS and implementation of the institution’s pending social and political mandates, among other issues.

Ambassador Andrews concluded by expressing his personal commitment to raising the level of political dialogue at the Permanent Council, in keeping with Belize’s role as the link between the two sub-regions of Central America and the Caribbean, as well as its conciliatory spirit of good faith.