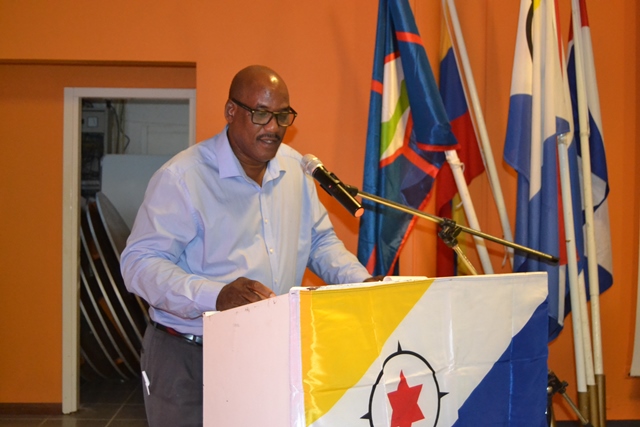 Kralendijk, BONAIRE – Recently, Foundation Nos Kier Boneiru Bek organized a conference at Plaza Hotel, which addressed a better future for Bonerian people, and for the other sister islands administrated by the Dutch.

After the conference, a gala dinner was held at Eddy’s restaurant with keynote speaker Dr. Corbin. Both events were successful and participants said that the conference was very informative and of international standard. 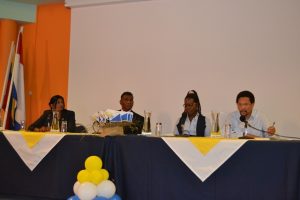 At the same time they were alerted on the direction that the relations in the Kingdom were heading, like Holland not respecting the rights and democracy of the people of the Kingdom. They will also start the process and road to the United Nations and international community to realize a relationship that is based on respect and fundamental inalienable rights for the people of Aruba and Curaçao and the other members of the Kingdom.

The conference counted on the presence of president of COPPPAL Mr. Pichardo visiting the islands of the ex-Antilles. COPPPAL is one of the major organizations in the world because it covers the whole hemisphere, from South America, Central and North America and the Caribbean and is allied with the Asian continent through ICAPP, and the African continent through CAPP. Pichardo promised to come to a resolution to support Bonaire and St. Eustatius completely.

This will be in effect through a special committee of decolonization of COPPPAL represented by its vice-president and coordinator Rudy Croes, who will take the case and cause to other international forums such as CELAC, ONASUR, to help re-establish respect and fundamental human right of self-determination and democracy “back to our peoples, who are helpless and cannot defend themselves and their rights against the administrating Dutch power, which visibly has started a re-colonization process. I, who under no circumstances, will count on the support and approval of the international community,” Croes stated.

Independent United Nations (UN) expert Dr. Corbin, who was one of the principal experts in assisting with the re-listing of French-Polynesia on the list of non-self-governing territories, recently in 2013 in his presentation, illustrated the world panorama of the non-self-governing territories and their political evolution. Further, he emphasized on the fundamental pillars of international law, resolutions and fundamental rights, which are anchored at world level and forms the base for the decolonization process.

It became very clear and reconfirmed that the actual imposed status by Holland on the people of St. Eustatius and Bonaire, is in violation of the principles of international law and human rights. Holland with the collaboration of the actual government to anchor the people of St. Eustatius and Bonaire in their constitution, is committing a major international crime by not respecting democracy. It has become an anti-democratic country.

“We can look back on a successful conference that has left behind a historical mark and fundamental base of hope and solidarity from our sister islands and from the international community, and that we are not alone anymore in our struggle to save the identity and dignity of the Bonerian people, and to prevent that the Bonerian people will be assimilated and eliminated and will disappear if we continue on this path,” Croes concluded.