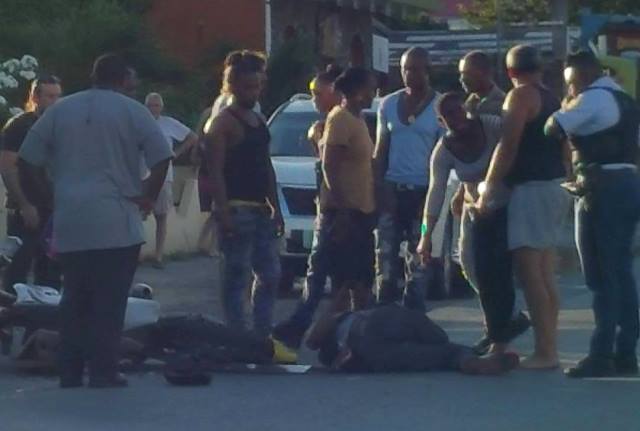 On Sunday December 4, at 4:45pm in the vicinity of Island Seafood Supermarket, a motorcycle rider was badly injured after an impact with a car threw him from his bike.

The motorbike rider was riding his motorbike along Welfare Road when he collided into a jeep. The driver of the jeep attempted a sudden left turn, causing the bike rider to slam into him.

The jeep continued on its path and collided with a parked car. The motorbike rider was taken to SMMC by ambulance after suffering severe leg injuries. As a result of his sustained injuries, he was flown to the Dominican Republic.

Witnesses are being questioned by the Traffic Department.

PHILIPSBURG – The biker, who was in a serious accident on Sunday, December 4, was flown to the Dominican Republic for further treatment.

721news understands that he sustained two broken legs and one broken arm. He also suffered head injuries, which resulted in a cracked skull. The man, who was identified by a relative as “Kerry,” lives on the Dutch side.

Police, up to late last night, did not issue any information about this serious traffic accident.

Kerry’s situation is very delicate, and he is fighting for his life.

The incident occurred late Sunday afternoon in Simpson Bay, when a car did not give him right of way to cross in front of him. This caused him to lose control of his cross bike, resulting in him slamming into other two cars.

Kerry sustained multiple injuries to both legs and an arm. He was then transported to St. Maarten Medical Center (SMMC). The Traffic Department is busy with the investigation.