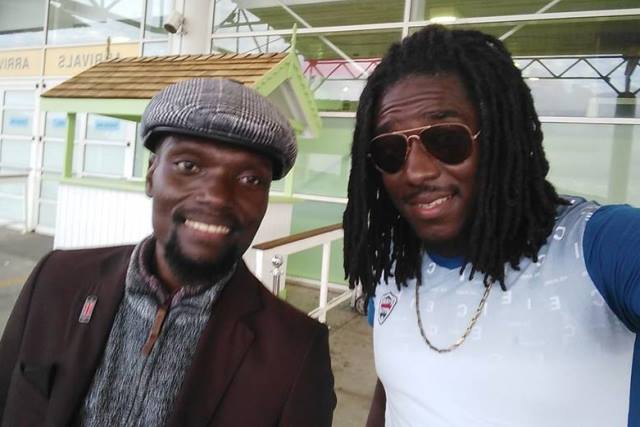 SAINT KITTS — Atta Boafo, the main artist for the Gospel Explosion concert scheduled for Friday Dec. 2nd at the Flow Grounds in Needsmust, has arrived in the Federation. Mr. Boafo arrived on Wednesday afternoon at the Robert L. Bradshaw International Airport, Saint Kitts on British Airways and will be engaged in promotions of the event and ministry at churches and schools on the island. He will also be present at an outdoor promotions event this Friday November 25th at The Circus from 12 noon to 3pm where he will take pictures with fans and where tickets will also be on sale.

Popularly known for the song: Double Double, Atta Boafo is a highly anticipated artist for Gospel Explosion 2016. Upon arrival at the RLB International Airport, he was greeted by his manager and promoter from Redeemed Promotions Jernel Auboine, representatives of JIFE Music, a gospel music record label in St. Kitts and co-promoters of the event and JIFE Music recording artist Di Anointed Vale, who is also one of the headline acts for the show and who will be releasing his debut album on that event. Boafo said patrons should expect not just another gospel concert. “We are here to glorify God…there is a double double blessing that is about to hit your family, that is about to hit your friends. Bring your family, bring your friends, bring you enemy,” he said. The event is on the 2nd (of December) but I am here right now. It shows that we are serious,” Boafo said shortly after he arrived on St. Kitts.

Meanwhile, Boafo said it was a pleasure working with Redeemed promotions. “I’ve worked with a lot of promoters. There are some promoters, I’ll work with them for the first time and then that’s it. I cancel them out because you see that their agenda is not of God. There are people only in it for the money. But with Redeemed Promotions it’s not just about the money; it’s about seeing people’s lives transformed,” he said. He told St. Kitts and Nevis fans to expect a mega blessing at the concert. “It’s not going to be double double blessing. It’s going to be a mega blessing. So get ready for it. Atta Boafo is here,” he said before singing a bit of his trademark “Double Double” song.

Tickets for Gospel Explosion are available at $45 at various ticket outlets including Bevons on Fort Street, Divinity Touch in Nevis, Dominion Radio, Kingdom Nails on Church Street, Morton’s Supermarket and Lawyer Andrene’s office on Liverpool Row. Gospel Explosion also serves as the album launch for JIFE Music’s Di Anointed Vale who will be launching his debut album: “Blood A Jesus” on that date. The concert is a joint venture between Redeemed Promotions and JIFE Music. More information can be found on the vent on www.jifemusic.com as well as JIFE Music and Redeemed Promotions Facebook page.