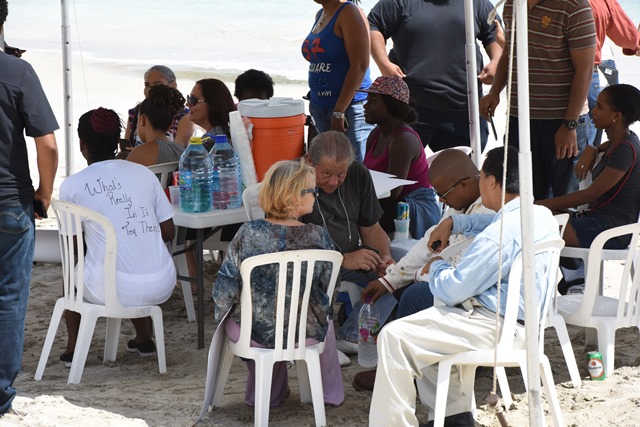 BELAIR – On Saturday, September 17, about 80 persons showed up on Belair Beach for a peaceful demonstration that was held against the groundbreaking of the Pearl Of China development Project.

Organizers Francine de Polo and Mercedes van der Waals-Wyatt indicated that the protest was about the manner in which government made the announcement to the people, being through a town-hall meeting on September 1 by the Minister of Finance Richard Gibson. This announcement was met with great surprise and amazement seeing that the ground breaking would take place exactly 17 days after this announcement.

The concerns of the organizers and the accumulated demonstrations were made known through many discussions held under a tent on the beach. Some of the concerns were: the lack of transparency about the project; traffic congestion for that area; needed studies for environment and social impact were not made available, and the Draft Development Plan for Little Bay has still not been finalized to the final Development Plan.

Besides expressed concerns, there were many questions like: Will the wetlands and the Little Bay pond be protected and preserved? What kind of sustainable jobs will be made available for the people of St. Maarten, and will St. Maarteners also have top managerial positions? Will the project obstruct the view of the residents living on the hill behind the project? What kind of effects of fumes and noise pollution will this project produce?

Emotions ran high at times of some of the demonstrators, yet they remained very peaceful. Demonstrators walked around placards, of which one stated: “We are not afraid of the Chinese, we are afraid of our own politicians.” At one point the demonstrators began singing the St. Martin song as the Chinese delegation and the officials arrived at the ground breaking site.

One of the protesters, Mr. Sjaoel Richardson, had with him a printout of an online petition against the project that over 850 persons signed, and said that different actions and activities will continue until answers are given to the people of St. Maarten.

Protest leader Francine de Polo’s concern was mainly the secretive manner in which government rushed this project even though they had knowledge of this project months ago. “There is no transparency, and there are too many unanswered questions concerning the best interest of the people of St. Maarten,” she said.

Transparency and the handling of the project procedures are also a concern to her. The manner in which she got to see a document at VROMI and was told she was not able to receive a copy, but could only take pictures, did not sit well with her. When she researched online the Government website, nothing was found with regard to the project.

“If I should object to this project, more information and clarity is needed. I’m trying to understand how they go about this procedure and why the rush on this project?”

The second protest leader Van der Waals-Wyatt was also concerned about the protection of the St. Maarten workers that allegedly will be hired to execute the promised 400 jobs, and what provisions have been put in place by Government to protect them in case the project would be hit by a natural disaster.

Van der Waals-Wyatt further indicated that there was only a small delegation of invited guests to the groundbreaking and thought that was very strange and was wondering if Parliament, Tourism and environmental specialists were fully aware of this development project, since it was a project brought forward by Ministers, and a project of this magnitude will have a big impact on St. Maarten’s development on all fronts.

The Chinese delegation invited the demonstrators to come and listen to what they had to say about the Pearl of China Project. The highlight of the demonstration was when Mercedes van der Waals-Wyatt, Francine de Polo and Mr. Sjaoel Richardson were given the chance to voice their concerns and questions to the head Chinese businessman of the Pearl of China project.

Though the language was a barrier, the interpreter was there to translate their concerns and questions. After the short meeting on the ground breaking site, the organisers received a card to able to contact the development Pearl of China representatives directly and the organizers agreed that they would be seeking a more formal meeting with them.

“It is indeed a miracle to see how a Chinese businessman from the other side of the world took time to listen to the concerns and questions of the demonstrators of St. Maarten, and our own government ignores the concerns of its own St. Maarten people, environmental activists/foundations, and tourism associations,” the organizers said.

The general public will be kept abreast of the next action or activities that will be done with regard to receiving transparency from our government officials on this Pearl of China Project and answers to the questions and concerns of all stakeholders. 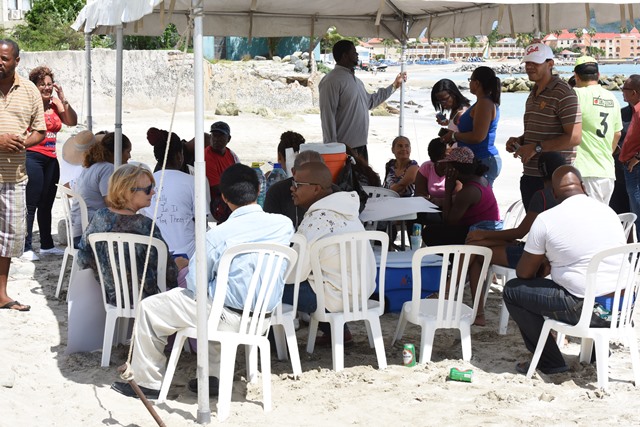 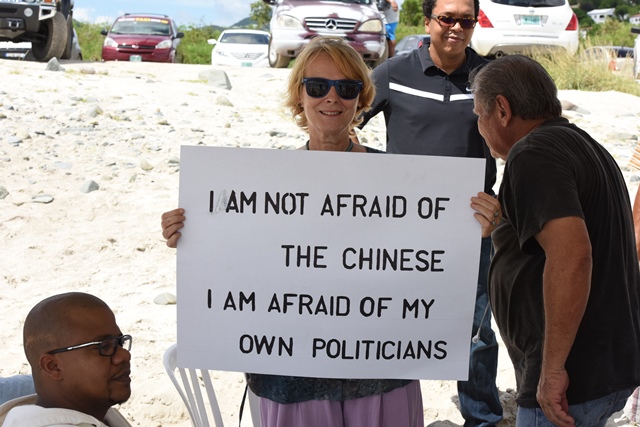 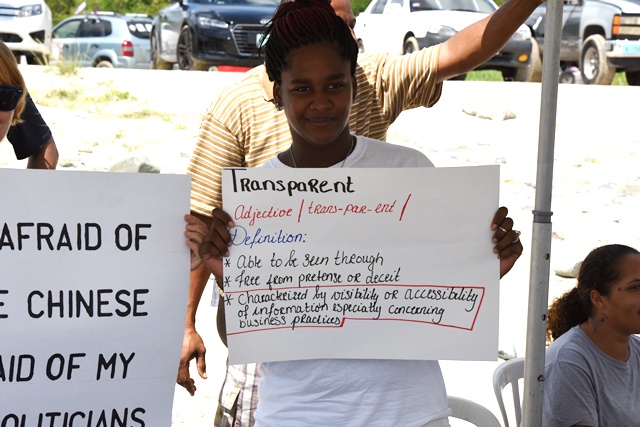 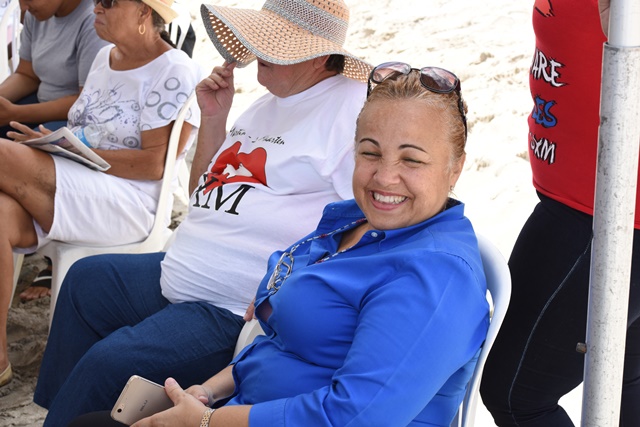 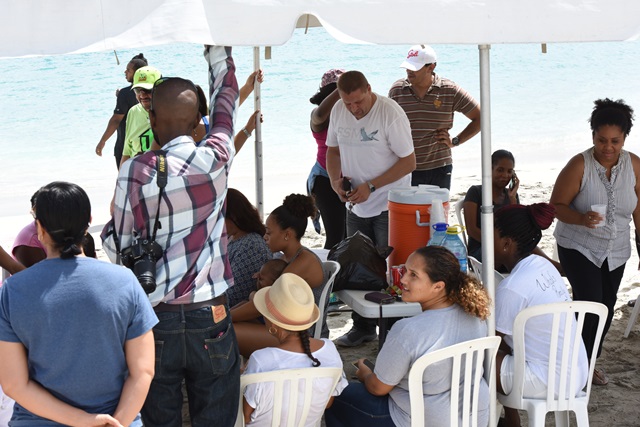 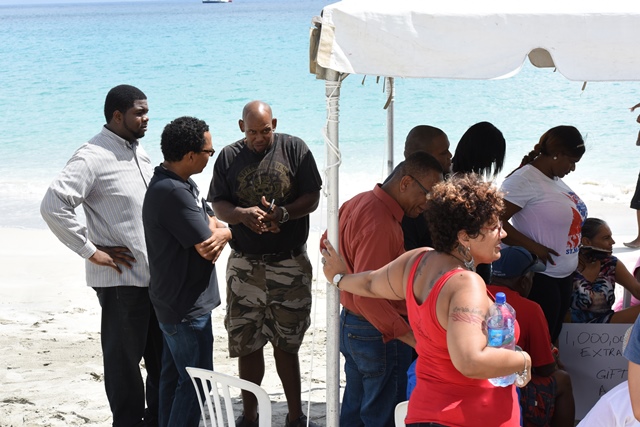 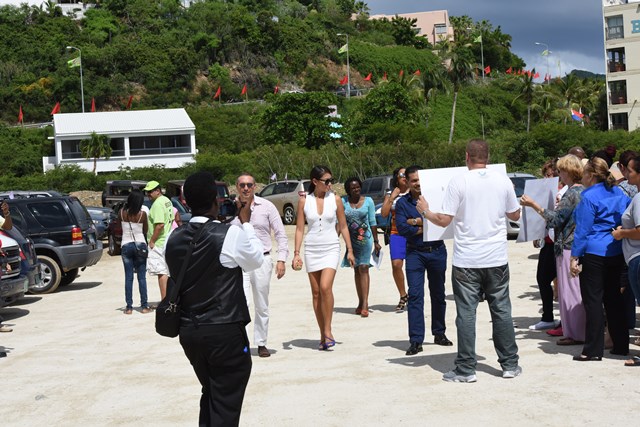 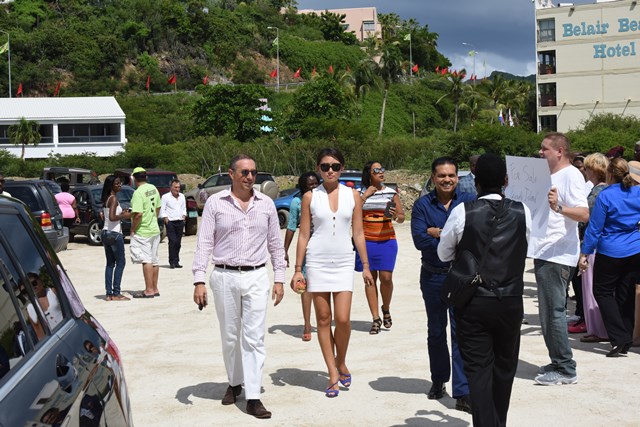 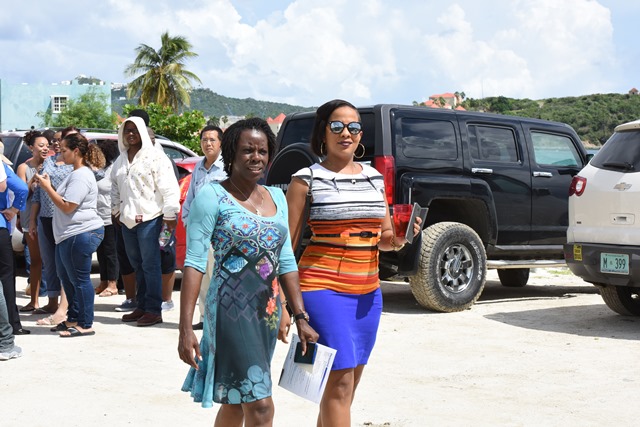 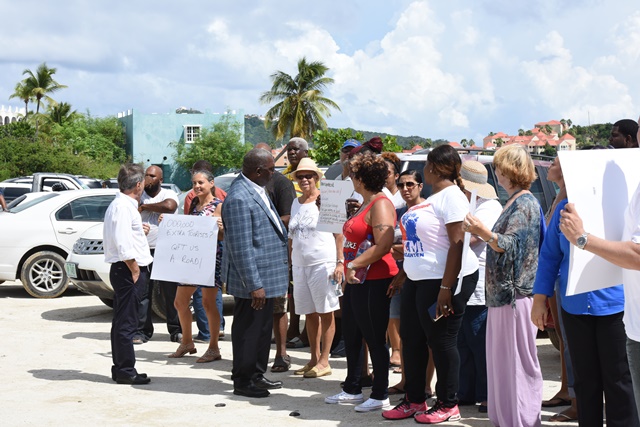 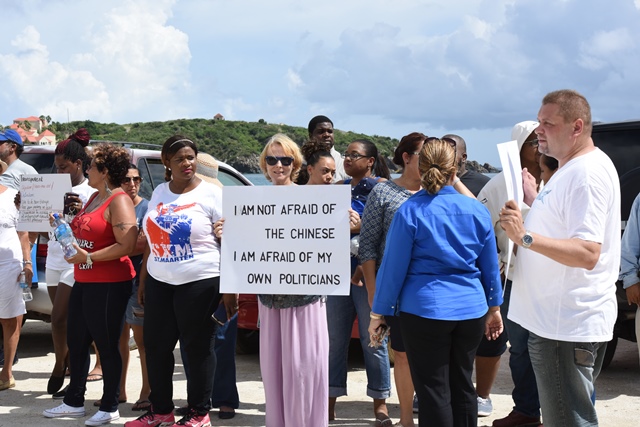 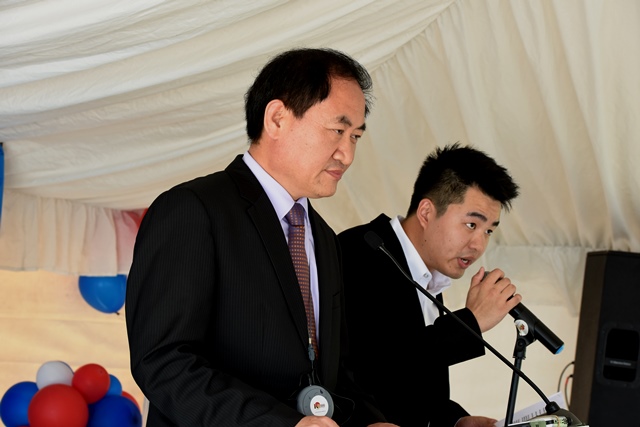