SINT MAARTEN / CANADA — Arrived at the St. Maarten Princess Juliana Airport. We set an 11:00am meeting time. Coach and Lisa arrived at 11:15am. Coach had a cup of coffee and then the boys started to arrive.

Adonis was first, just minutes before 11:30. Lewis was next and followed by the Kings, Theo, Zack, Skylaar and his brother and last as usual Tre and Triston.

As we waited to check in, we were greeted and sent off by Members of St. Maarten Rotary Clubs, represented by Soc, President Veronica and Okama.

Once we checked in most of the boys ate pizza. Adonis headed to a wall outlet and charged his video game. 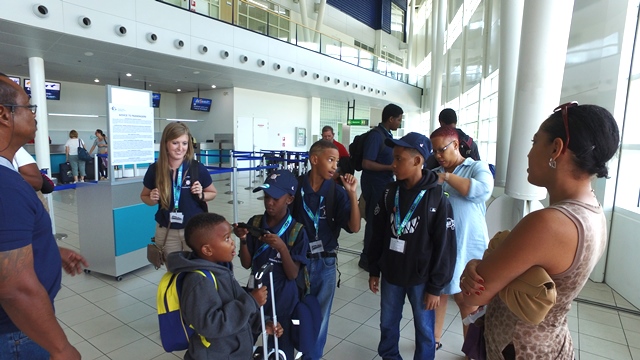 On the plane we met Coach Tricia and her two girls. They were headed to Canada to visit family. They shared snacks with the boys.

Once in the air, Coach Tom passed out worksheets, and each member of the team ranging in age from 6 to 15 did one piece of work.

The group then relaxed for the 4-hour plus flight. For some reason we circled Florida for about 15 minutes before being allowed to continue to Canada. From the windows the group saw Florida, and hours later we watched the sun set over the Great Lakes.

As we neared Toronto, Tre spotted the CN Tower and Rogers center. They could see people on the field.

We landed and exited the plane. One boy did not want to leave as he could not find his checked bag. Later he discovered baggage claim. Yes, first flight.

Group had to wait as Skylaar had left his phone on board. Before reaching Immigration, we stopped for a bathroom break. As we headed toward Immigration, we had to stop again. Skylaar had left his bag. We passed through immigration quickly and easily. With the delay, we were the only ones in line, so the officers shouted to me the questions as to where we were staying, reason for trip, etc. Lots of friendly smiles and a big “Welcome to Canada. Enjoy your stay.”

We were met in the arrival area by Rotary Host Lezlie, Baseball coach Rob and award winning author who wrote the I Can books the boys have all read, Miriam.

We quickly separated into three groups, loaded into the cars and had a 2-hour drive to St. Catherine’s. The fridge was full, and the ladies made the boys sandwiches. It was near midnight. Coach had a cup of coffee.

All was well. Day 1, we are safe and sound and in Canada.