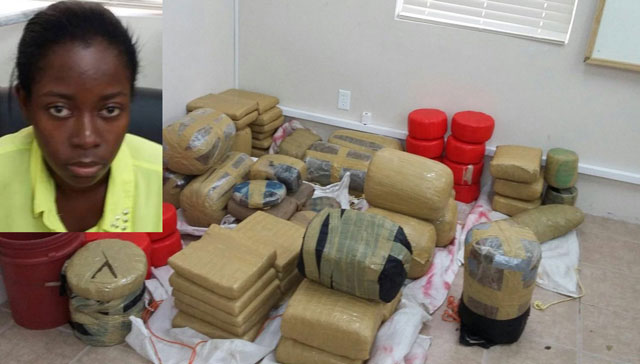 A 10-year-sentence for trafficking drugs hung over 21 year old Patricesia James, a Cherry Garden resident, but she was spared and walked out of the Magistrate Court in Charlestown on Tuesday teary-eyed after being found guilty of having in her possession over $5.2 million dollars of cannabis and fined $100,000.

James, who was arrested in November of 2015, was reportedly found with 517 lbs. of marijuana with a street value of ECC $7.75million dollars in her house. On Tuesday, officers claimed it was only 436lbs. worth ECC $5.232 million.

James, a mother of two, faced Magistrate Yasmine Clarke on Tuesday and pleaded not guilty to the charge of possession of cannabis and possession with intent to supply. She was charged on November 13, 2015 with the offenses. James was represented by attorney Natasha Grey.

In court on Tuesday police Acting Inspector Euro Collins-Percival called investigating Sargent Carline Phillps to the stand to give her testimony. According to Philips, on November, 10 2015, a search warrant was obtained and investigations were carried out on James’ residence in Cherry Gardens.

“Based on intelligence and further investigations the search warrant was executed by the Anti-Narcotics Unit, Special Services Unit and the Nevis Task Force on the Cherry Gardens residence of Patricesia James on November 13,around 12:15 p.m.,” Philips said.

Sargent Phillps testified that during the search the cannabis was found behind a locked door in James’ home. When she open the door the several white cracker bags were discovered in the corner of the room, along with a bucket and a taped bale that was on the top of the bags. The officer said she told James the items were suspected to be cannabis. One of the taped bales on the top,Phipps testified, had a hole in it, though which she was able to see a vegetable material suspected to be cannabis. James was arrested and taken into custody.

On November 21 the drugs were transported to St. Kitts for drug analysis which determined that the vegetable-like material was cannabis and weighed 436 lbs. The street value was an estimated EC$5,232,000.

“So you trusted the person enough to hold the drug without payment?” Percival asked.

On re-examination, James told the court she didn’t know it was drugs.

After hearing the testimony from both sides, Magistrate Clarke found James guilty on both offences.

James‘s attorney Grey pleaded to the court for a non-custodial sentence and noted James told the court she was holding the items for someone else. Magistrate Clarke reminded Grey of the saying “the harbourer is worse than the thief.”

Grey asked the court “temper justice with mercy. Give her the opportunity to return to society and care for her children and let her know what she did was wrong. I am begging the court to consider outside acustodialsentence.

Clarke noted that according to the Drug Prevention and Abatement of the misuse of drugs, Chapter 15, 6 3, James is also guilty of trafficking and stated that once a person is found with more than 15 grams of cannabis they are considered as a trafficker.

“You do not need to be charged with trafficking once they have more than 15 grams it is deemed to have it for trafficking,” Clarke said that the sentence is a maximum of 10 years or a minimum of five years for the offence.