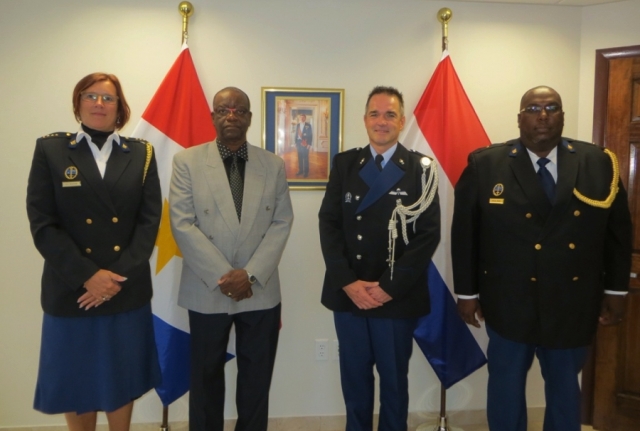 This swearing in ceremony took place in the presence of the Deputy Chief of the Dutch Caribbean Police Force, Simone Steendijk and Acting Island Governor, Franklin Wilson. Van Loo is the successor of Ibrahim Ekiz.

The 51 one year old van Loo is working already 34 years with the Royal Marechaussee and has experience in diverse disciplines in among others border control by air, land and sea, support to the police force in Maastricht and The Hague and with the drugs and fraud detective team.

“As team leader I have had the opportunity to coach and lead several teams. This background and experience is what I bring to the new position on Saba”.

Van Loo has also earned his stripes at the international level. He was deployed to the crisis areas Kosovo, Sarajevo, and Mostar (the former Yugoslavia) where he has worked at different headquarters.

Together with his team the new Chief of Basic Police Care for Saba will be committed to serve the people of Saba. “I am extremely interested and motivated to get to know and understand the people and the culture of Saba.

I hope through my work on Saba to be able to make a valuable contribution to the society”.