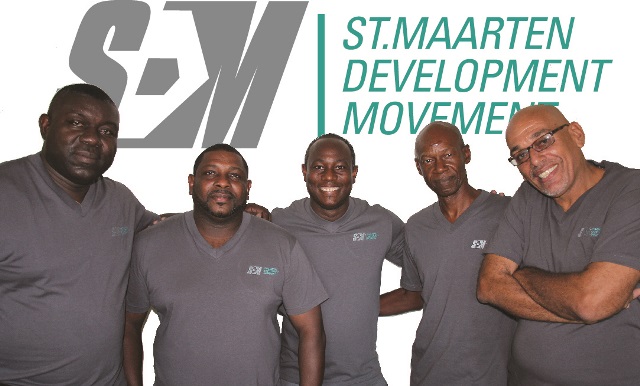 Although the hurdle of postulation is still around the corner, SDM is confident that the people of St. Maarten, their members and future members will give the movement the needed support through votes to obtain the chance of being elected representatives of St. Maarten.

The SDM with the slogan: “The Status Quo Got to Go” intends to bring change by reforming the Government system, promoting equal rights; improving the quality of life for everyone and not only a selected few; and revolutionizing the way things are currently done by being innovative. “Our movement is still growing as people continue to show their interest and express their concerns about the Status Quo of St. Maarten,” an SDM press release stated.

The candidates who have pledged their alliance so far are:

Ortega, founder and leader of the SDM, also known as “Benny” from St. Peters. Ortega was born and raised in St. Maarten and completed his MBO Civil Engineering in the Netherlands. While working in the Netherlands, Ortega specialized in Asphalt and Concrete Pavement, Urban Development and the Geographical Information System (GIS). In St. Maarten, Ortega furthered his career as a project manager for Public Works. As project manager he initiated the improved asphalt patch work program and designed, engineered and executed many infrastructural projects such as over capping of Cole Bay Hill, LB Scot Road and Retreat Estate upgrades. Now, Ortega works at the Port of St. Maarten as Facility Manager, where he successfully contributes to the FIX-IT mentality of the harbor, ensuring that innovation, adaptation and project management skills are key to the success of having a well maintained and operating Port Facility.

Arthur Bute, a successful businessman in St. Maarten, is well known for his contribution as Board member to the Social Economical Council (SER), and Chairman on the Board of Directors of the Chamber of Commerce. Bute has strong roots on the Dutch and French sides.  He studied Public Administration at the UNA (University of the Netherlands Antilles) and obtained diplomas in Marketing (NTI) and Middle Management. Bute is also certified in Tourism Security Management, Corporate Governance, Physical Vulnerability Assessments and successfully finished the Program “De Authentieke en effectieve Commissaris St. Maarten (AEC).” Bute anticipates contributing in the fields of tax compliance, economic development and immigration, and pledged to educate, legislate and propose execution plans that will benefit to the overall improvement of St. Maarten.

James R. Busby, born and raised in St. Maarten, went to study in the Netherlands where he specialized in various sections of Sports Development and (technical) management processes. Busby developed sporting infrastructures in various municipalities in the Netherlands, and has been working for the St. Maarten Government for the last 28 years. Alongside his current government projects, he is known for his volunteer work in the field of Sports, and is an advisor for the St. Maarten Sports Federation (SMSF).

Raymond P. Matser was born in the Netherlands and raised in St. Maarten (Middle Region) since the age of 2. Matser studied at the HLO (Hoger Laboratorium Onderwijs) in the Netherlands. After his studies he served in the Dutch military service and gained work experience in Information and Communication Technology (ICT) in Europe, the US and the Caribbean. In 2004, Matser brought his ICT knowledge to St. Maarten and worked for some of the groundbreaking companies in the ICT world (NCR, ECC, AIS). After working for over 20 years in the ICT sector he took up his most recent position within VROMI as acting Head of Domain Affairs. In 2014, he resigned to take care of his family to enable his wife to start her own business.

Lastly, but not least Terrance M. Frederick, also known as “Terry” was born and raised in St. Maarten. Frederick studied in the Netherlands where he obtained his degree in Electrical Engineering and Social Orientation, as well as his Doctorate of Divinity and Theology. Back in St. Maarten he started his own daycare center. After that he moved into the transportation sector, and became the General Secretary of the Dutch St. Maarten Taxi Association Executive board. During his tenure as the General Secretary, he strived to enhance and strengthen the association to benefit all taxi drivers. He fostered a close working relationship with the Port of St. Maarten and many cruise executives. Frederick considers himself a Tourism Ambassador, and remains passionate about the tourism industry.  Currently, Frederick is the Owner and Managing Director of Imperial Security Services (ISS), yet remains connected to transportation by being a driver in the industry. Frederick has his heart set on improving (public) transportation through tourism based solutions.