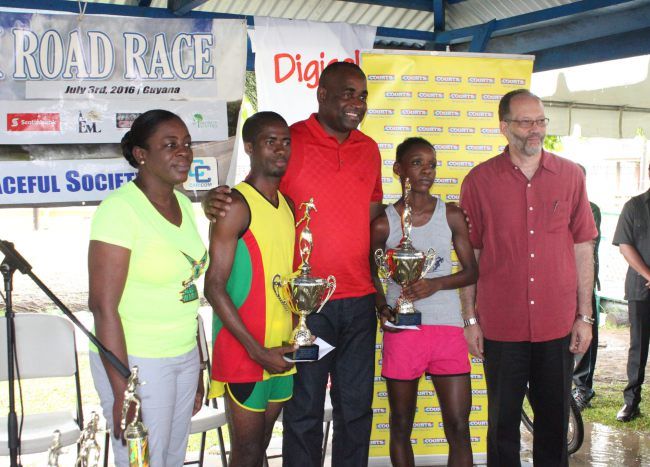 Four-time CARICOM  10k winner Cleveland Forde of Guyana copped his fifth title in the latest edition of the CARICOM 10k Race on Sunday morning (July 3) in his native Guyana. He completed the race in 32:39 minutes. Linda McDonald  brought victory to St. Vincent and the Grenadines in the female category with a time of 37:57.  The second place in the male category went to Curtis Cox of Trinidad and Tobago clocking in at 32:56 while Winston Missingher of Guyana raced to third place with a time of 33:28.

Second place for the females went to Euleen Josiah-Tanner from Guyana who finished at 39:46 and Guyanese Andrea Foster got third place with a time of 40:37.

This was the twelfth staging of the CARICOM 10k race which was held under the theme ‘Promoting Healthy and Peaceful Societies’. The start line was the CARICOM Secretariat, while the end point was the National Park where a presentation ceremony was held.  In addition to the main event, there were three supporting events –  a 5K race, a 1500m race for schools, and a special race for athletes with disabilities.

The first place male winner in the 5k race was Ricky Williams, while second and third went to Tyrese Yensen and Joel Williams respectively. All three athletes were from Guyana. In the female category first place went to Joana Archer second place to Tabitha Benman and third to Kissanna Glen, all from Guyana.

Of special note were the two eldest participants in the 10k and 5k races Mr. Franklin Archer and Mr Phillip Beckles, both of Guyana, who completed their races with commendation.

There were four participants in the 1500 m race for schools and the youngest participant was Jalani Cheddi. The winner in that category was Ezekiel DeSouza, while second and third went to Khelani Glen and Jeremiah Harrison respectively.

The event was attended by CARICOM Chairman and Prime Minister of Dominica Hon. Roosevelt Skerritt, Secretary General of CARICOM Ambassador Irwin LaRocque and Minister in the Ministry of Sports, Guyana, Hon. Nicolette Henry.

In his remarks at the awards presentation ceremony Prime Minister Skerritt commended all of the participants for their efforts. He said physical activity was critically important within the Region which continued to deal with the challenges of Chronic Non-Communicable Diseases (CNCDs). He also commended the CARICOM Secretariat for including all levels of society in the event.

All levels of society need to be involved in physical activity to prevent CNCDs,” Prime Minister Skerritt said.

Guyana’s Minister of Sports, Hon Nicolette Henry said it was wonderful to see the high number of participants. She said those who participated were examples of how commitment and dedication paid off for health and well-being.

The race was held to coincide with the 37th Regular Meeting of the Conference of CARICOM Heads of Government which will be held in Georgetown, Guyana, 4-6 July. The opening ceremony will be held tomorrow at the National Cultural Centre at 5:00 p.m.