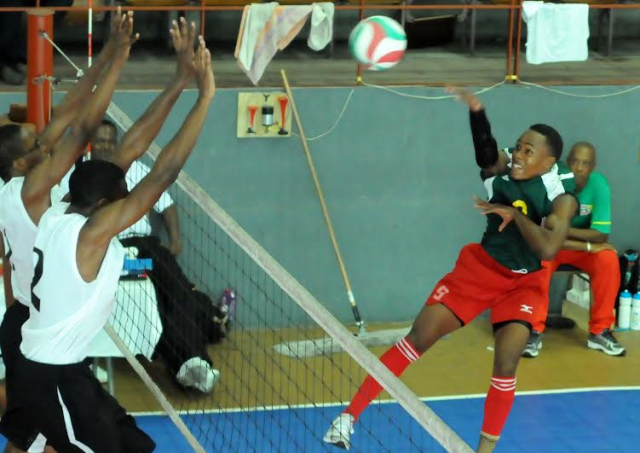 ANTIGUA –– Team Grenada, devastated from their last night’s defeat, redeemed themselves by thwarting the British Virgin Islands (IVB)  with a score of 25 – 18; 25 – 19; 25 – 13.  Kevon Noel standing six feet five inches tall, took the attack to the opposition with eleven (11) points, whether he was serving or hitting thunder bolts from way up high.  Team Captain Nikel  John (10 points) was very supportive and found it easy to motivate his team.  Team Grenada soon had offensve and defensive flows as every player seemed engrossed in the game.   These efforts allowed them to placed 5th in the 2016 ECVA competition.

Team IVB played till the end with some beautiful blocking and hitting.  Mourillion Paul (eleven 11 points) was the lead protagonist he seemed to be able to hit at will whether inside or outside.  However the team seemed drained as very little emotions came from them.  This paucity in energy and emotion resulted in numerous unforced errors, upon which their opposition exploited fully.

Grenada’s Captain Nikel John and Coach Braithwaite being true sportsmen till the end, congratulated IVB on their efforts in today’s game.   Both gentlemen were rather elated at the victory and noticed the team was very relaxed.  Team Captain John noticed his team mates were more confident and they got into their groove rather easily. Coach Braithwaite congratulated his team for placing 5th but was of the opinion they could do better.  He was pleased with the team’s serving and he opined the best is yet to come from team Grenada.

Team IVB’s Captain Mikey Joseph along with his Coach, offered congratulations to Grenada for winning the match.  The Captain was of the view his team made a good effort and he is rather proud.   He is looking forward to competing in other ECVA events but players will have to work on their individual skills if there is to be improvement.  Coach Stephan Payne reported pockets of brilliance were seen during the tournament but greater preparation is needed and more players have to be recruited.   He concluded by saying while work has to be done, the British Virgin Islands will be back. Pictures by Ernesto Beltre.