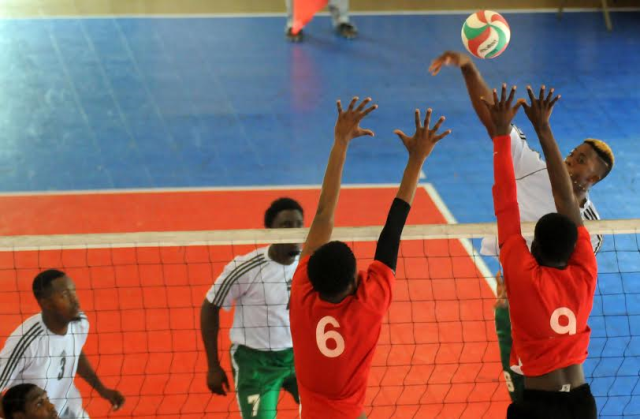 ANTIGUA — Clinical is the best word that described the Antigua’s dismantling of team Dominica in three sets with a score o f 25 -19; 26 – 24; 25 – 21.  Antigua and Barbuda seemed to have delved into YouTube’s video of spectacular plays as they ran the pike, hit through the middle and from the outside.  Antigua and Barbuda’s Jamarie James (27 points) and Captain Adrian Constant (11 points) seemed unstoppable.  The former often spiked from above the blockers, leaving no chance for the defense.   The overall team effort brought loud cheers from the small, partisan crowd.

Team Dominica fought hard to remain in the competition.   In several sets they clawed their way back in with good defense, and periodic hits.  Unfortunately Antigua and Barbuda’s smothering defense offered little room for respite.  Despite this, Dominica marched on, forcing Antigua to the limit in the second set with very good defense and communication.   However, passing errors made it difficult to maintain the team’s rhythm.  Dominica main scorers were Captain Florent and Shervaun Roberts.

Antigua and Barbuda’s team vice Captain gave high commendations to the Dominican team for their spirit of play and how they affected the game plan.  The Vice Captain further stated his team made some unforced errors that gave away too many points.  He concluded they will be corrected in time for the finals. Team Coach Collin Mickey Thomas highlighted areas such a blocking and passing as areas to be addressed.  He concluded his remarks by indicating the team will be ready for the finals.

Dominica’s Captain Yohan Florent and Coach Albert Leblack applauded the efforts of their opposition for a good game.  The latter succinctly summed up his thoughts by saying the team did not stick to the game plan.  Team Captain Florent was at a loss for words but simply stated his team did not play to their full potential.  The team will ready themselves for the third place game later today and put this game behind them. Pictures by Ernesto Beltre.