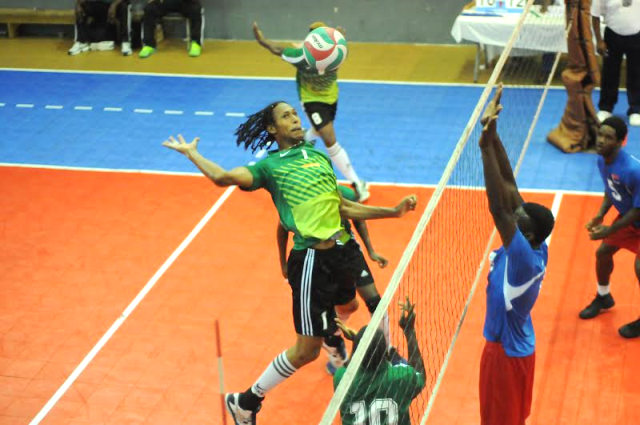 ANTIGUA –– Dominica rushed out to an unassailable lead in set one, this momentum catapulted them to winning the game with a score of 25 -23; 20 – 25; 25- 22.  The new, rejuvenated Dominica seemed eager to win this match and hustled for every point.  Unlike other games, they began using the outside hitters more often.  However, when the scores got really close the setter often reverted to his favorite quick set.  Captain Florent and Roberts were the main scorers for their team.

The St. Maarten squad was possessed by the “never say die bug” as they kept the scores close.  Unfortunately serving errors and ill directed passes, often gave away free points to the opposition. Despite this, Captain Blijden kept motivating his team to push through and remain focused.  Shawn Gumbs (10 points) and Shaquille Rombley (15 points) kept the score board ticking. Unfortunately it was insufficient to negate the point difference in the fourth set.

Dominica’s team Captain Florent and Coach Leblack were not satisfied with the level of performance of the team as they did not play to their potential or play aggressively.  Coach Leblack also indicated the team placed extra pressure on themselves as they lost focus and strayed from the game plan.  He further lamented that mental growth could help his team improve.

Captain Evander Blijden and Coach Demitri Beauperthuy of team St. Maarten extended congratulations to Dominica on their victory.  They further commented the team played well and the level of competition was extremely good.   The team coach noted that several players began cramping up but next tournament, St. Maarten will be better than ever.