DUTCH capital Amsterdam was plunged into chaos as cops arrested two people after a bomb scare at the city’s main airport.

Hundreds of people and armed police could be seen crowded outside Amsterdam’s Schiphol airport shortly after 9.30pm local time.It later emerged that the Sheraton Hotel adjacent to Amsterdam airport was also evacuated due to a “suspicious situation”.

A bomb disposal robot was pictured at the airport surrounded by officers at around 11pm local time.

A police helicopter was reportedly seen circling around Schiphol according to a journalist at local media source AT5.AT5 also reported that only a portion of the airport has been evacuated.
Masked police officers have cordoned off the area.

TWITTERARREST: Police were quickly on the scene to arrest suspects
One Twitter user referred to the incident as a “terrorism” threat.She wrote: “S*** just got real. There is a high terrorism threat at Schiphol Amsterdam airport. That’s exactly where I am right now.”
Police spokesman Alfred Ellwanger said a first man was arrested earlier tonight and that an operation is ongoing to search an area where buses stop outside the airport’s main terminal.

TWITTERLOCKDOWN: The police reportedly blocked off entrances to the airport
Local media reported that Mr Ellwanger gave no details on why exactly the man was arrested or on his identity.He said the arrest followed “a report of a suspicious situation”, but didn’t elaborate.
Asked if the situation involved a threat to the airport, Mr Ellwanger said: “It’s too early to say”.

The official Schiphol Twitter account said this evening: “Part of Schiphol is not accessible due to an incident.”Police is investigating the matter. For now, air traffic has not been affected.”Witness Tony Fonderson said: “Everyone is remaining calm. Shops were evacuated.” 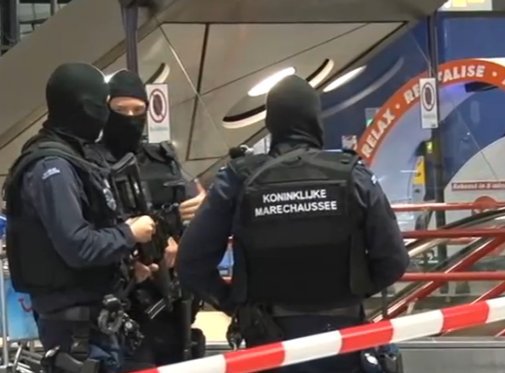 TWITTERARMED AND READY: Dutch police were quickly onto the scene
Witness Victor Pascual meanwhile said people started running frantically.”We have not been give any further information apart from to remain calm,” he added.The second arrest appears to have been made at Leiden Central Station about a 20-minute train ride from the airport, according to Ministry of Justice and Security spokesman Lodewijk Hekking.