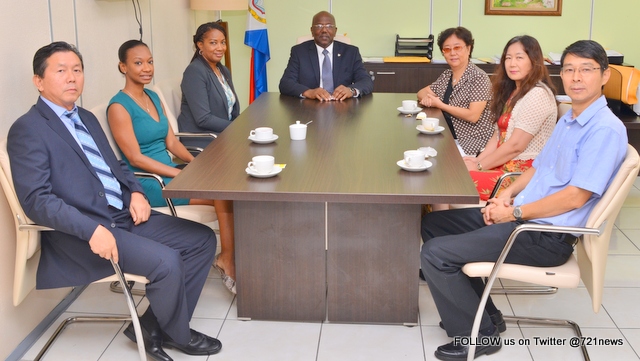 Philipsburg – The Prime Minister of St. Maarten the Honorable William Marlin received a courtesy meeting call from the Consul General of China to the Dutch Caribbean, Madam Chen Qiman at his Cabinet on Monday December 7th, 2015.  Madam Chen is the central point of consular and diplomatic services for Chinese nationals living in the Dutch Caribbean.

Topics involving tourism and education cooperation were discussed where the Consul General (CG) of China Madame Chen, emphasized the possibility of attracting Chinese tourists to Sint Maarten. The newly introduced visa waiver policy currently allows Chinese tourists with a multiple entry Schengen and or US Visa to enter Sint Maarten without a Dutch Caribbean Visa. This policy opens the opportunity for Sint Maarten to create tailor-made packages for Chinese tourists.  The CG further explained that the Government of Sint Maarten should take the first step in securing a bilateral tourism agreement with China followed by marketing efforts that will aid Chinese familiarization with Sint Maarten’s tourist product.

Prime Minister William Marlin further noted the possibilities of a sister- city agreement and or a form of Sint Maarten representation in China.

As it relates to education cooperation, Consul General Qiman discussed with both Prime Minister and Minister of ECYS Hon. Ms. Silveria Jacobs, the possibility of establishing a Chinese Language Institute with an objective to teach residents of Sint Maarten Mandarin in anticipation of future tourism links. The Consul General is seeking support of the Government of Sint Maarten to assist with the realization of this institution.  The Madam Chen Qiman also noted that the Consulate in collaboration with the University of Saint Martin will continue with the language courses offered at the tertiary institution.

Madam Chen is the first Consul General of the People’s Republic of China and has 24 years of international experience as a diplomat. Before her appointment in the Dutch Caribbean she was active as Consul General in Zanzibar.