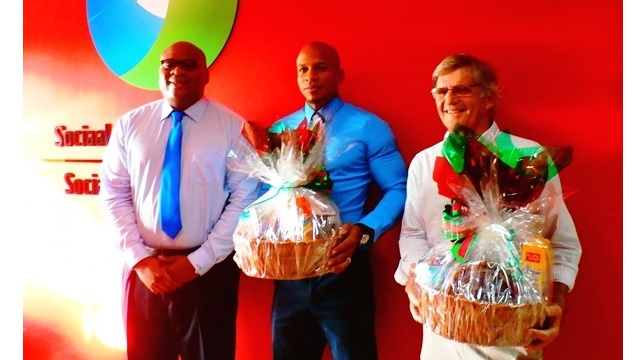 HARBOR VIEW—At the end of a productive year of activities, the Social Economic Council (SER) this week distinguished two members from their midst as ‘most valuable member’ and substitute member of 2015.

Out of the nine permanent SER members, three of whom  represent the labor unions, three stem from the business community, while three are appointed by government as independent experts, it was Mr. Dwight Williams upon whom the honor of most valuable member was bestowed. Mr. Williams, Vice-chairman of the council representing the independent experts, was accredited for his consistent attendance, and his common sense  approach during the SER deliberations.

For each SER member a substitute member is appointed, who is expected to attend meetings in case a permanent member is indisposed. Out of the nine substitute members, Mr. Robbie Ferron representing the Sint Maarten Hospitality and Trade Association (SHTA) was selected for his frequent voluntary attendance of SER meetings, in which he consistently and energetically contributed to the meetings. Mr. Ferron is the substitute for Mrs. E. Henriquez-Dijkhoffz of the SHTA.

In a small ceremony on Thursday, December 10th at the SER office, the distinguished members received a small token of appreciation from the hands of SER Secretary-General, Gerard Richardson.