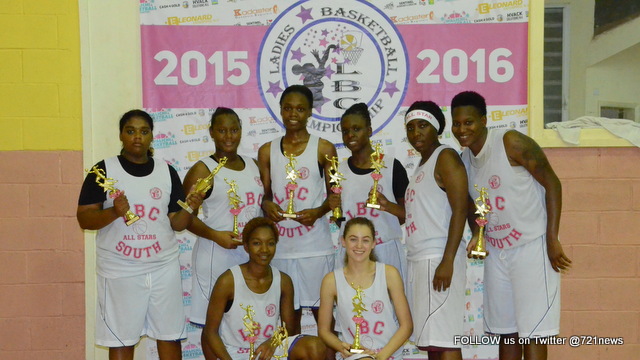 Sucker Garden, St. Maarten — The 2nd All Star Weekend began on Friday with the all-stars and other players unwinding at Cactus Bar & Grill in Sucker Garden. Saturdaybegan with the U13 All Star Game between Learning Unlimited and Lightning. Learning Unlimited won 12-0 and was led by Riya Baharani with 10 points. The U16 All Star Game consisted of St. Martin with Thunderz players and St. Maarten with Lightning and Learning Unlimited players. This game was intense and competitive throughout. St. Martin led 19-16 at the half and won the game 36-34. St. Martin was led by Aisha Carty with 15 points and St. Maarten was led by Kayla Robinson with 16 points. The night ended with a 3×3 double elimination tournament on the outdoor court. Lightning and Thunderz had 3 teams each consisting of 2 females and 1 male from their respective team clubs.  The Thunderz team consisting of Claudia Fleming, Chantel Hodge and Patrick Griffith won all 4 games to win the tournament. Second place was Thunderz Team Joyette Lloyd, Nicairi Ortiz – David and Jordy Nunez and third was Lightning team consisting of Tsjaquilla Jeffrey, Sudienne Gumbs and Joshua Bowers. 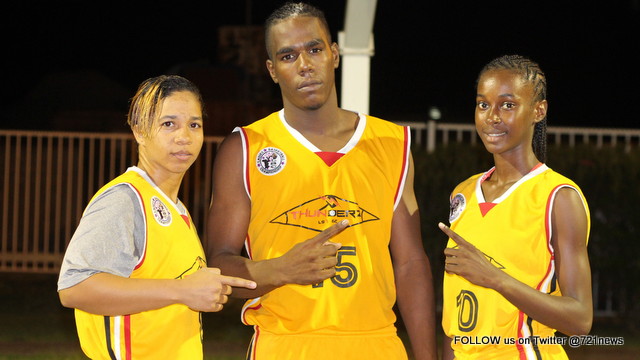 The weekend continued on Sunday with various activities. It started off with the skills competition with 6 competitors namely Quillesha Duggins, Chantel Hodge, Joanne Laurence of Thunderz, Keri Hyman of Bush T Remedy and Tsjaquilla Jeffrey and Jamaiah Newton-Herbert of Lightning. Chantel Hodge won against Jamaiah Newton-Herbert in the final round with a time of 39.70 seconds vs 50.30.
In the 3 point shootout there were 12 competitors and in the final it was the defending champ Claudia Fleming of Thunderz vs Selah Fleming of Lightning. No one was backing down and there was two ties of 6 and 7 before the third go around in the final round where Selah scored 8 points vs Claudia’s 3 points. Selah Fleming was then named the 2015 LBC 3 Point Shootout Champion.

The LBC Celebrity Game was full of fun consisting of actors, singers, Dj’s and various other professional functions in the community. LBC Celebrity Team 1 named Woodslaves with celebrities such as Da Brat, DT the Artist, Dj Outkast and Sigma Defense defended their crown and are 3 time defending champs in the LBC Celebrity Game. They beat celebrity team 2 named Kings by a score of 38-36 with celebrities Duncan van Heyningen, King Vers, Junior Lion, SoloKween and Rene Violenus. All The celebrities had a great time and are looking forward to playing again very soon to defend their win and to take down the champs. 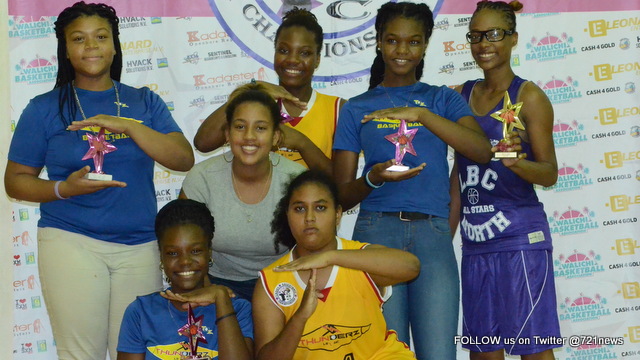 The South All Stars was led by All Star Game MVP Jakisha Brooks with 13 points and supported by Jamaiah Newton – Herbert with 12 points. The North team was led by Joyette Lloyd with 16 points.

The Walichi Basketball Association would like to thank everyone who participated, assisted and attended the All Star Weekend activities.

The Ladies Basketball Championship is on a break and will resume on Sunday January 10th at 2pm with the U16 division and at 3pm with the senior division.
Game highlights, pictures, game scores and schedule can be viewed on the Facebook page ‘Ladies Basketball Championship’. Highlights and full games can be seen at www.youtube.com/walichibasketball.