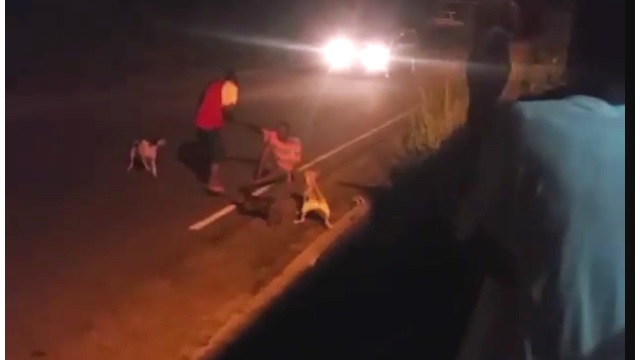 PIAYE, Saint Lucia – A video of man chopping a man mercilessly on a main road in southern Saint Lucia has been published on social media.

Reports are that the video is that of an incident that occurred on Saturday night (Nov. 21) when a young male, known so far as Martin, was chopped multiple times by another male in Piaye, Laborie.

The incident occurred around 8:30 p.m. The male was hospitalised but his condition is unknown at this time. It is not yet clear if the attacker, who reportedly fled the scene, was caught and arrested.

In the 16-second video obtained by St. Lucia News Online, a male is seen chopping another male, who is on the ground trying to block the blows with his arms. He eventually got to his feet but the attacker continued to rain blows on him with a machete.

Three barking dogs surrounded the duo amid the sound of screams from an unseen female, heard in the background. A third person intervened, seemingly in an effort to rescue the victim.

A black vehicle slowed almost to a stop alongside the two men during the chopping.

A male could be seen watching the incident from a balcony.

The Laborie Police Station has confirmed that the incident occurred but could not provide further information.

BELOW IS THE VIDEO. VIEWER DISCRETION IS ADVISED.